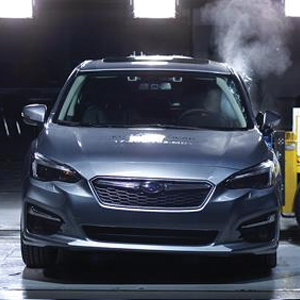 Both XV and Impreza models are equipped with 7 airbags, including one SRS knee airbag installed for the driver’s seat, and a revised seatbelt equipped with a locking tongue reducing injury levels and better protecting all passengers in case of collision.

Subaru’ EyeSight Driver Assist technology is fitted as standard on both all-new Subaru XV and Impreza, which achieved very good performance in the Autonomous Emergency Braking at Euro NCAP test with cars and pedestrians. The EyeSight Driver Assist technology is a set of two digital stereo cameras that monitor the traffic movement to warn the driver of a threat ahead and to apply pre-collision braking in emergency situations, in order to avoid or at least to mitigate the collision. The EyeSight system also ensures the lateral support functions, warning the driver of unintentional lane departure and assisting the driver in keeping the travelling lane.

“We are very pleased that the Euro NCAP has recognized the new Subaru XV and Impreza with 5 star rating in their recent tests”, said Masamichi Kudo, President and CEO of Subaru Europe. “Safety is the core value Subaru provides to customers and we are proud to have been endorsed all over the world with outstanding safety recognitions for both new models, and now also in Europe. This marks the 6th time in a row when Subaru has been honored with the prestigious five star rating from Euro NCAP following the 2009 rating for the Legacy, 2011 Subaru XV, 2012 Forester, 2014 Outback, and 2016 Levorg”.

The all-new Subaru XV and Impreza received prestigious recognition on the safety performance at a global level. Both new models (Japanese specs.) won 3 awards in the Japan New Car Assessment Program (JNCAP) crash safety evaluation tests conducted by the Ministry of Land, Infrastructure, Transport and Tourism (MLIT) and the National Agency for Automotive Safety and Victim’s Aid (NASVA). Firstly, both new models received an award for reaching 5 star safety ranking. Secondly, they won the 2016-2017 Grand Prix Award for earning the highest safety score ever score of 199.7 of maximum 208 points. Lastly, the two new models received the Special Award for having a pedestrian protection airbag as standard (in Japan).

After their launch in USA, both the Subaru XV and Impreza (American specs.) received the 2017 TOP SAFETY PICK+ award from the Insurance Institute for Highway Safety (IIHS), an independent, nonprofit scientific and educational organization dedicated to reducing the losses–deaths, injuries and property damage–from crashes on the nation’s roads.