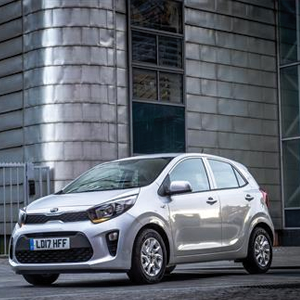 Kia Motors (UK) Ltd. is pleased to announce the Picanto has been awarded the ‘Best Car for less than £150 a month’ at the Carbuyer Best Car Awards. The Picanto was praised for its practicality and value for money, with the Picanto 1.25 MPi ‘3’ being highlighted for its level of standard equipment.

The third-generation Picanto went on sale in the UK earlier this year. The Picanto ‘3’ is one of five trims available and comes with 15-inch alloy wheels, Autonomous Emergency Braking and a 7-inch centre-mounted ‘floating’ touchscreen, giving access to the navigation, infotainment and connectivity systems. It is the first small Kia to have Kia Connected Services powered by TomTom™ and Android Auto™ and Apple CarPlay™ via apps pre-loaded onto a smartphone.

Commenting on the success of the Picanto, Carbuyer Editor Stuart Milne said: “The Kia Picanto has grown up, but thankfully it’s still a new-car bargain. You can buy a well specified Picanto ‘3’ for less than £150 a month. For that, you’ll enjoy the Apple CarPlay™ and Android Auto™ technology operated through one of the simplest and most responsive infotainment systems in the business. The price isn’t the only draw, though: the Picanto is also good looking, practical, cheap to run and good to drive. If you’ve got £150 a month to spend, you can’t do better.”

Paul Philpott, Kia Motors (UK) Ltd’s President and CEO commented on the Picanto’s win: “It’s fantastic news that Picanto has won yet another award since its launch earlier this year. It goes to show that our finance deals, offered via our 188 strong dealer network, are competitive and popular. The Picanto has always been a strong selling model for us in the UK, mostly selling just behind our bestselling Sportage. With this recognition and a strong product offering we’re feeling positive about the future of our new city car.”