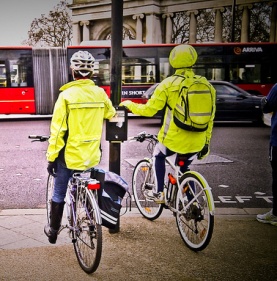 Large numbers of cyclists are risking their lives by forgetting to use bike lights and wear high-visibility clothing, new research has shown.

A study by Autoglass found that 48% of cyclists admit to being caught without lights or high-visibility clothing when the clocks go back.

Commuter cyclists are most likely to be unwittingly caught out, the survey found, with 63% admitting to forgetting to utilise the basic night safety equipment.

More than half (57%) of cyclists surveyed admitted they could take more action to make themselves visible to other road-users in the dark.

Matthew Mycock, Managing Director at Autoglass, said: “Cyclists are the only group of road users at increased risk of injury and death on the roads over recent years and ‘stealth-cycling’ shouldn’t be an option.

“It’s crucial that cyclists do all they can to protect themselves and standing out with high visibility clothing can help to save lives.”

The number of cyclists seriously injured increased by 4% to 3,222.

Image courtesy of garryknight, with thanks.