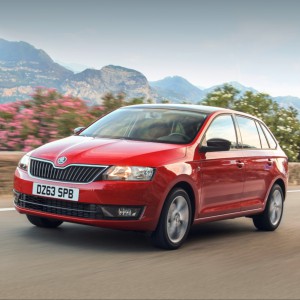 Skoda are hoping the launch of their new Rapid Spaceback will push the manufacturer to a million global sales a year, the company’s UK Brand Director has claimed.

The new offering, which is released in January, aims to plug the gap between the Fabia and the Octavia, as Skoda aim to hit 100,000 sales a year in the UK.

Skoda describe the vehicle as their first entry into the compact hatchback class, and expect it to grow the brand in their less successful European markets.

Alasdair Stewart, UK Brand Director of Skoda, believes the Spaceback could be worth 8,000 sales a year in Britain, alongside 4,000 Rapid saloons.

It will compete with the Hyundai i30, Kia cee’d and bottom-end versions of the Ford Focus and Vauxhall Astra.

Traditionally the Octavia fulfilled the task, claims Mr Stewart, but the latest model is larger and plusher than previous versions and has consequently moved upmarket.

“Octavia customers have traditionally been aged between 50 and 55, and bought the car with their own money,” he said.

“When the new model came out we thought those customers would move to the Rapid saloon, but that hasn’t happened the way we thought.

“They have gone to the new Octavia.

“The Spaceback opens up a new sector for Skoda, a bit like when we introduced the Citigo.

“It will appeal to younger buyers and families, and will be more lifestyle-driven, so we will take a more digital approach to selling.

“But we will advertise it on TV, based on the theme of space.”

“We are at the start of the roll-out of the new Skoda global distribution strategy,” he added.

“This will involve investment from dealers to smarten up a bit, new training programmes, a stronger emphasis on customer retention and finance packages.

“Our customer retention is 30%, the highest in the Volkswagen Group, but we would like to push this up to 45%, which would then allow us to change our marketing strategy.

“We have our campaigns ready, and now the new products are coming along.”