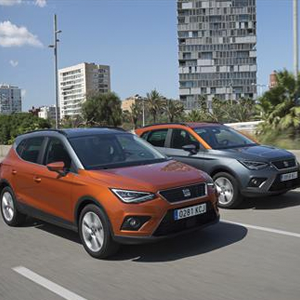 SEAT Vice-President for Sales and Marketing Wayne Griffiths pointed out that, “October was an excellent month and it reflects the positive trend we have been experiencing throughout the whole year. Growth has been very solid, especially thanks to our brand pillars Ibiza, Leon and Ateca, joined now by the new Arona, which we expect will contribute to maintaining our sales momentum. In addition, the sales performance is having a remarkable impact on the market share in most of our main countries. SEAT is currently one of the fastest growing brands in Europe”.

Commenting on SEAT UK’s continued momentum, Richard Harrison, Director, said, “Our products are really hitting the mark, including all of our latest releases, such as Ateca, Leon and Ibiza. Not only are we on track to have another record year in the UK, we’re attracting more and more customers to the SEAT brand. Now with Arona coming on stream in one of the fastest-growing market segments, we’re in very good shape.”

The biggest product offensive in the history of SEAT continues now with the new Arona crossover. The first units are already being delivered to customers and are expected to sustain the brand’s upward sales trend. In the last quarter of 2018, SEAT is going to extend its range still further, with the launch of an SUV which seats up to seven passengers.

The product offensive boosts SEAT’s profits
SEAT’s financial results in the first three quarters are a positive reflection of increasing sales. In the first nine months of the year, the company’s operating profit grew by 12.3% compared to the same period in 2016 to stand at 154 million euros, thanks to the greater sales volume and the increased profit margin due to more sales of upper range vehicles, like the Ateca, and better equipped models. Likewise, revenue went up by 11.0% from January to September, reaching a total of 7,255 million euros.