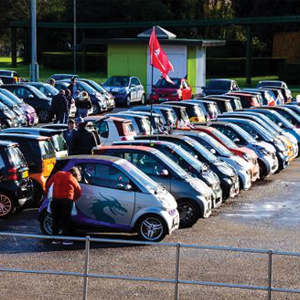 A record turnout of as many as 166 colourful Smart cars made Beaulieu’s Simply Smart the biggest and best yet, rounding off a record-breaking 2017 Simply rally season.

More than 300 rally participants included a group of keen enthusiasts who had travelled from as far as Belgium to take part. They were joined by scores of Beaulieu visitors for the celebration of fun, wacky city cars.

Zany colour schemes and personalised bodywork provided a vibrant line-up of ForTwo, practical ForFour and sporty Roadster which filled the National Motor Museum’s Events Arena. With an even greater variety of Smart cars on show than ever before, this triumphant end to the Beaulieu events calendar saw old friends and new owners meet up to talk all-things Smart.

Wrapping up the hugely successful 2017 season of Simply rallies at Beaulieu, Simply Smart’s bumper turnout follows in the footsteps of Simply Porsche, Simply Japanese and Simply Ford, which all achieved record numbers. Also scoring highly for the variety and volume of vehicles on display were this year’s Simply Aston Martin, Simply VW, Simply Jaguar and Simply Land Rover, which saw Beaulieu come alive with hundreds of awesome cars.

The People’s Choice Award at this year’s Simply Smart gave visitors the chance to choose their favourite event car, with the greatest number of votes going to the eye-catching 2015 ForFour of Carron Dymond, from Worthing. Covered in a funky vinyl wrap in the style of Star Wars’ R2D2, the Force was certainly strong with this unique machine which is Carron’s fifth Smart. Carron was presented with a commemorative Beaulieu trophy and a special Autoglym prize by Visitor Services Manager Jon Tee, before leading a cavalcade of the highest scoring cars through the grounds.

Paul Rixon, from Amesbury, took second place with his 2006 ForTwo convertible. Purchased to replace a Harley-Davidson motorcycle, this vinyl-wrapped soft-top provides plenty of wind-in-the-hair fun. Third place went to Robin Davis, who had driven from Essex in an impressive champagne-coloured 2001 Roadster. Both Paul and Robin received a special Autoglym prize and Beaulieu chocolate, before joining the cavalcade.

Simply Smart traditionally takes place on Remembrance Sunday and a two-minute silence was observed at 11am at the event on November 12th. A reading was given by retired Royal Navy CPO and proud Smart owner Mr Tod Sloan, who also took part in the show’s cavalcade in his own Smart.