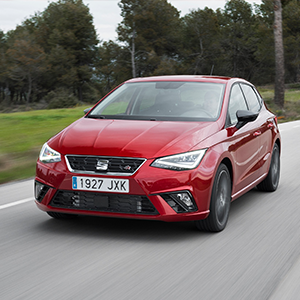 After the SEAT Ateca was awarded the ‘Best Buy Car of Europe 2017’ by AUTOBEST, the Spanish brand has once again received recognition from the European organisation, which has announced the new SEAT Ibiza as a finalist in the same awards.

AUTOBEST’s prestigious ‘Best Buy Car of Europe’ award is all about choosing the best all round car of the year on the market considering not only the design, comfort, ride quality, and dynamic handling of each car, but also, value for money, sales network and after-sales service.

AUTOBEST’s judging panel is made up of 31 European countries and as such is the largest independent automobile panel in the world due to the number of represented countries. At the end of November, the 31 motoring journalists that make up the AUTOBEST panel will put the six finalist cars through a series of exhaustive and demanding tests on the Vairano test track in Italy. There, a winner will be chosen for AUTOBEST’s Best Buy Car of Europe 2018 which will be announced on 15thDecember.

The New SEAT Ibiza stands out for including the most advanced technology in terms of safety, driver assist systems and connectivity. In addition to this, thanks to the deployment of the new MQB A0 platform, the new Ibiza is more compact on the outside and yet more spacious on the inside. The New SEAT Ibiza also received five stars; the highest number possible; in the EuroNCAP crash tests, performing particularly well in passenger protection and in the efficiency of its driver assist systems, especially the emergency brake’s Front Assist system.

Awarded SMARTBEST 2017
Besides that, the awarding of AUTOBEST’s SMARTBEST 2017 award to SEAT for its pioneering integration of Amazon Alexa into its car range is also worthy of note. SMARTBEST is the first prize in the world dedicated to connectivity in the car industry. SEAT’s association with Amazon and the integration of the voice-controlled personal assistant is a true milestone for the company and a great push forward in the digital ecosystem and connectivity at SEAT, and puts the Spanish brand at the vanguard of connected cars in Europe. It must be taken into account too, that the demand for voice-controlled assistants is increasing among drivers, and the possibility for development and to increase the functions that Amazon Alexa offers is infinite. Amazon Alexa will be available in the SEAT Ateca and Leon at the end of 2017 and in Arona and Ibiza in 2018.

This recognition from the European motor press confirms the good times the Spanish brand is experiencing are here to stay. SEAT is not only achieving positive financial results, but on top of that, it is carrying out its biggest product offensive in its history with the launch of the Ateca, Leon, Ibiza, Arona and the future large SUV that will hit the roads in 2018.

In the first nine months of this year SEAT has sold 354,900 cars, which represents a 13.4% growth in comparison with the same period last year, the company’s best results since 2001. The rise in sales in 2017 is reflected in SEAT’s financial results. The company’s operating profit increased by 12.3% in the first nine months when compared to the same period in 2016, achieving 154 million euros. At the same time, turnover increased by 11.0% reaching 7,255 million euros between January and September 2017.