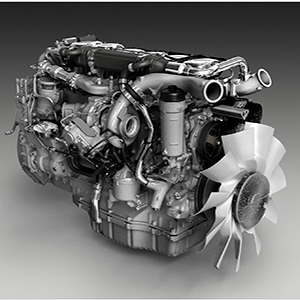 Scania are broadening their Euro VI truck engine range with the introduction of a 450hp, SCR-only 13litre unit.

The engine has been introduced to provide operators a choice of EGG/SCR or SCR-only units at the 450hp point for 44tonnes gross train weight operation.

“The 410hp version of our SCR-only 13litre engine has proved itself to be immensely frugal in service, while also offering a less complex Euro VI engineering solution.

“This has encouraged us to further explore and develop the options, the outcome being our new 450hp SCR-only unit.

“Operators now have a range of 18 different models of Scania Euro VI engines to choose from.

“This provides a wealth of opportunities to tailor powertrains and optimise performance, thereby further enhancing efficiency in operation.

“By matching specification to the operation and developing and coaching drivers to achieve and maintain high levels of performance, Scania can help operators achieve fuel savings of up 8%.”

According to calculations, a Scania Streamline equipped with the new engine results in a 1% fuel saving compared with the EGR/SCR model – everything else being equal.

In the case of Scania, this is normally an average of 6% of diesel fuel, while engines with EGR and SCR normally require 3%.

For those who want to optimise their diesel fuel capacity, Scania offer a several AdBlue tanks, including special solutions that ‘intelligently’ use vacant space inside the frame.