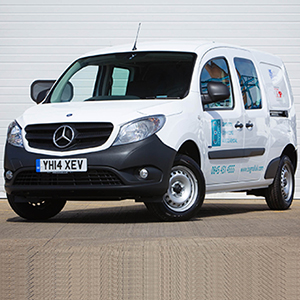 Leeds-based Rhodar have invested in 14 new Sprinters and a single Vito from Northside Truck and Van, while parent company Lexia Solutions Group have obtained a Citan.

The Sprinters are all 313 CDI models and equipped with fuel-saving ECO-Start systems.

Most of Rhodar’s 180-strong van fleet are Mercedes-Benz models, but the new arrivals have replaced vehicles by another manufacturer.

Stephen Haigh, Group Fleet Manager at Rhodar, said: “We know from experience that the Sprinter is extremely cost-effective to operate, and very reliable.

“Also important is the fact that we can get our new vans maintained outside our own working hours, thus avoiding costly downtime – unlike the supplier of the vans we’ve stood down, which was basically a car dealer, Northside are proper commercial vehicle specialists and understand our business needs perfectly.”

The Vito 113 CDI and Citan 109 CDI are both Dualiner variants with second rows of seats, so are capable of carrying a driver and four passengers.

Rhodar were already running nine other Vito models; however, it is the first time that a Lexia Solutions Group company has operated a Citan.

The new vans are now transporting work crews, tools and equipment to sites across the UK; some also tow mobile decontamination units which are effectively highly specialised caravans, divided into three compartments.

After working on an asbestos site operatives enter at the ‘dirty end’, remove all their protective clothing, then move through to the middle section, which is equipped with showers, before exiting through the ‘clean end’.

The Citan is the subject of a CharterWay contract hire agreement with Mercedes-Benz Financial Services.

“We’re dipping our toe in new waters to a certain extent with this vehicle,” added Mr Haigh.

“When we heard Mercedes-Benz was launching a new small van into what is a fairly cut-throat market sector, we were concerned that it might be expensive.

“In fact, the contract rates are highly competitive.

“The split folding rear seats, with attached bulkhead grille, also make it very flexible in use – we can mix and match the seating and load area depending on the needs of each job.”