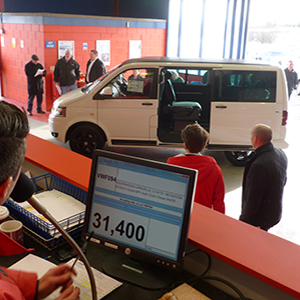 The vehicle – which was sold at British Car Auctions’ (BCA) Measham site last month after being entered by VWFS – went for the highest fee ever recorded for a VW Transporter at BCA.

Duncan Ward, General Manager of Commercial Vehicles at BCA, said: “This was a very rare example of the Caravelle Transporter, with a particularly high specification.

“This is executive travel at its most luxurious and we had a huge amount of interest from buyers.

“Just 225 examples of this particular specification were built, so it is not a vehicle you will see every day.”

“[The Volkswagen Caravelle] is executive travel at its most luxurious and we had a huge amount of interest from buyers.”

It was offered with a full service history, having covered just 21,000miles from new, and was finished in white with alloy wheels and black contrast trim.