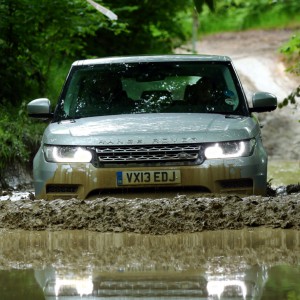 Land Rover are facing huge demand for the new Range Rover Sport – with 15,000 pre-orders already ahead of its autumn release.

The vehicle will hit European showrooms later this year, while other models further broadening its appeal will be launched in 2014.

It will initially be available with 3.0litre V6 turbodiesel and 5.0-litre V8 supercharged petrol engines, priced from £51,550.

However, a V6 diesel and a 4.4-litre V8 diesel will launch within months, while a diesel hybrid with CO2 emissions of only 169g/km is being developed.

Land Rover have also confirmed that in time there will also be a model with a four-cylinder engine, likely to debut in 2015.