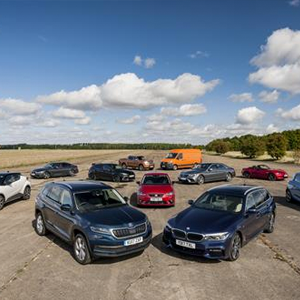 Parkers.co.uk, the reviews website that delivers trusted no-nonsense advice for Britain’s car-buying public, has announced the Toyota C-HR as the winner in the Parkers New Car Awards 2018. The groundbreaking crossover takes the overall prize, but there are also 16 category winners, ranging from the Best First Car to the Best Car for Thrill-Seekers.

The Parkers.co.uk team had a tough job choosing the overall winner, with the C-HR strongly challenged by the Skoda Kodiaq, SEAT Ibiza and BMW 5 Series Touring. But the Toyota took the honours based on its involving drive, futuristic yet practical design, low-cost engine options and long five-year warranty.

The Parkers New Car Awards are launched this year, and reflect the views of Britain’s car-buying public. The winners were chosen based on the buying habits of the website’s 2.9+ million users* actively involved in the buying process.

The awards categories have been shaped by constant analysis of Parkers.co.uk traffic. Detailed research shows that 77% of Parkers.co.uk site users consider buying cars from multiple market sectors, destroying the idea of traditional competitors and rivals. Hence the Parkers New Car Awards are not based on conventional segments.

Parkers.co.uk research also found that 78% of UK car buyers don’t like automotive jargon. As a result there are no categories based on industry terms such as SUV, Crossover and Supermini. Instead, the Parkers New Car Awards are based around car-buying lifestages – for instance Best Car for Small Families or Best Seven-Seater – reflecting how the great British public buy cars to fit their lifestyles.

The winning cars have been tested rigorously by the Parkers.co.uk team, which judged them on a combination of cost per month, value, quality, excellence and fitness for purpose. The Parkers New Car of the Year 2018 was chosen from the category winners, and is the car the team felt is the most compelling new vehicle you can currently buy.

In another automotive media first, the Parkers New Car Awards 2018 is partnering with sister brands from across Bauer Media’s portfolio of 107 magazines, websites and radio stations, which reaches one in two of all UK adults. We are truly speaking to car buyers in places other publishers cannot reach, including on national radio stations such as Kiss.

Keith Adams, Parkers.co.uk editor, said: ‘It’s exciting that we’ve combined what we know about what our users are viewing on Parkers, with the team’s total 100+ years of editorial expertise. We’re pleased to have chosen such an interesting winner in the Toyota C-HR, in a thoroughly excellent line-up of cars.

‘The Toyota C-HR is a brilliant example of how the most functional of family cars can be spiced up with exciting detail, thoughtful touches and intelligent design to become a true game-changer. The Parkers.co.uk team loves the way it drives, and so, it seems, do the younger buyers who are now flocking to Toyota dealers, after years of passing them by.’