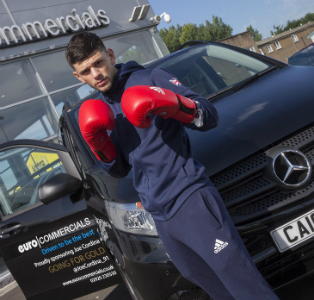 The 24-year-old Cardiff fighter is in the final stages of preparation for this summer’s Olympic Games in Brazil. And training just became a great deal easier, because he has local Mercedes-Benz Dealer Euro Commercials in his corner.

The Cardiff-based company, which also has outlets in Newport and Swansea, has loaned Joe a sporty and spacious Vito crew van, initially for six months but with the option extending for longer once the Games are over.

The 116 BlueTEC model has five seats and a practical cargo area, and has already put in some serious roadwork – Joe has been using it to travel between home and the Team GB boxing headquarters in Yorkshire on a weekly basis.

“I travel up to Sheffield on Monday and stay there for the week, so I need to be able to carry a lot of kit and clothing,” he said. “But at the weekend I also want to be able to go out with my partner Lauren and our daughter Sofia Grace – she’s just one year old, so her pram and all the stuff you have to carry takes up a lot of space.

“The Vito is just perfect. It’s great to drive, really comfortable and just eats up the miles on the motorway. It carries a huge amount of luggage and the low floor and large tailgate make getting large items in and out easy. The engine packs quite a punch too – a bit like me!”

One of Team GB’s strongest hopes for an Olympic medal, Joe boxes at Lightweight and will be competing in Rio in the 60 kg category. He already has a Commonwealth Games bronze medal, won in Glasgow two years ago, and is also the reigning European Champion.

“I’ve taken part in some pretty big tournaments but the Olympics is on another level altogether, and Brazil is further than I’ve ever travelled before,” he said. “It’s hugely exciting of course but I won’t be distracted – I’m there to do a job, to win my fights and bring home a medal, and I’m completely focused on that.”

The Vito 116 BlueTEC is powered a 163 hp, 2.2-litre common-rail diesel engine which conforms to the latest Euro 6 exhaust emissions standards, and is capable of returning a remarkable 47.1 mpg. Versions are also available in panel van and eight-seat Tourer specification, with a wide range of engine options, and uniquely in either front- or rear-wheel drive configuration.