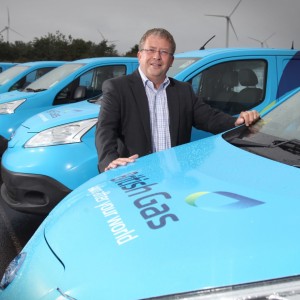 The vans will join British Gas’ 13,000-strong home service fleet until April 2014 in the pilot, which is in conjunction with Hitachi Capital and Gateshead College.

British Gas will assess how the vans perform in winter conditions during typical daily usage patterns.

Colin Marriott, General Manager for Fleet at British Gas, said: “We’re committed to leading the industry in reducing the amount of carbon and other harmful tail pipe emissions emitted by our 13,000 strong vehicle fleet.

“This trial, the largest of its kind in the UK, is a great opportunity for us to understand how the Nissan e-NV200 vans perform during the winter as we move towards our goal of having at least 10% of our fleet running on electricity by 2015.

“We have worked closely with Nissan and Hitachi Capital to ensure that the Nissan e-NV200 is ready to support our engineers during even the most demanding of winter conditions.

“All 28 have also been provided with a British Gas home charging point and access cards to public infrastructure to keep the vehicles charged up.”

Hitachi Capital’s dedicated British Gas team have extensively tested to prove the concept, playing a key role in rolling it out to engineers and providing ongoing 24hour support.

They have also undertaken IMI training in conjunction with Gateshead College and will generate accurate total cost of ownership modelling to compare this technology with internal combustion engine drivetrains.

Gateshead College delivered training to the British Gas drivers to ensure they are fully-briefed in how to drive and live with the Nissan e-NV200.

Nissan have been globally piloting the e-NV200 for two years ahead of the van going on sale to the public next year.

Jim Wright, Managing Director of Nissan GB, said: “We’re proud to be providing the vehicles and services for the UK’s largest-ever electric commercial vehicle pilot in conjunction with our strategic partners.

“Piloting such a large number of vans with British Gas in advance of the e-NV200 going on sale in 2014, underlines the closeness of our relationship and marks the final stages of the vehicle’s development.

“Our engineers will take the feedback of the British Gas drivers to ensure we launch a vehicle perfectly suited to British road and business conditions.

“With an expected harsh winter ahead, the 28 Nissan e-NV200s will be delivering home services around the country whatever the weather, demonstrating how strongly the 100% electric van can perform for large fleets with challenging daily routines.”