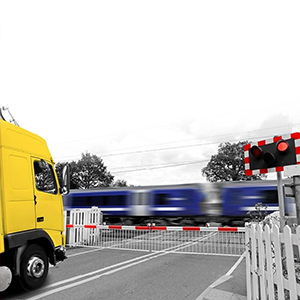 Aimed at reducing the number of incidents involving professional drivers, the programme will educate fleets on the safe use of level crossings.

The campaigns comes after figures revealed almost a fifth of the 142 near-misses that occurred at level crossings in 2013 included a vehicle driven in a professional capacity.

The programme involves Network Rail’s 100 level crossing managers, who are based all over Britain, engaging with local employers whose workforce includes a significant number of drivers.

Network Rail are rolling out the programme among their own driving fleet, which comprises approximately 7,400 road vehicles.

Julia Territt, Head of Fleet at Network Rail, said: “Safety is our top priority and with one of the biggest fleets of road vehicles in the country, we want our drivers to lead by example.

“As well as ensuring that drivers are aware of the Highway Code’s requirements on level crossing usage, such as the need to stop at amber lights, we want all professional drivers to be aware that misusing a level crossing not only puts their life at risk but also their livelihood.”

Network Rail have produced a range of pack materials, which employers can distribute to their drivers or include in training packs.

They are also working with companies to deliver bespoke interactive presentations and forums, where they will work with drivers to reinforce good level crossing use practice.

The sessions will remind drivers that although crossings may seem an inconvenience, they are in place to save lives – theirs as well as those on trains and other road users.

As well as the risk to life, the misuse of a level crossing also poses a threat to the career of a professional driver as it is a criminal offence to misuse a level crossing.

This year has seen the successful prosecution of drivers for careless or dangerous driving at level crossings.

In Bugle, Cornwall, a delivery van driver was prosecuted, resulting in a fine as well as incurring costs and penalty points on his licence.

The driver was also suspended from his job pending the outcome of an internal investigation.

In Rossington, Doncaster, a driver found guilty of dangerous driving lost his licence for 12months and will need to take an extended test in order to get his licence back.