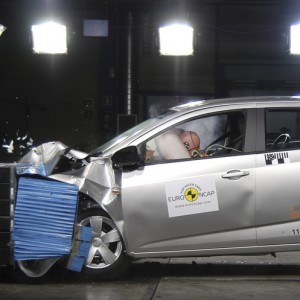 Crash prevention technologies are critical to fleet decision-makers, an independent survey has shown – and Mazda are wasting no time in capitalising on the demand for safety.

With safety the prime concern, Mazda are responding to customers by offering such life-saving technology on their most recently-launched models – the Mazda6 and Mazda CX-5 SUV crossover.

eSafety systems such as autonomous emergency braking and pre-crash alerts were the two technologies survey respondents said they would like most on their next car.

Even if a crash occurs, its severity is likely reduced due to the safety features built into the vehicle, lowering serious injury counts and vehicle repair bills.

As such, life-saving Autonomous Emergency Braking (AEB) – which reduces accidents by up to 27% – is standard across the Mazda CX-5 range, available from £21,395.

Known by Mazda as ‘Smart City Brake Support’, the technology is also available as standard on new Mazda6 SE-L and Sport models.

Euro NCAP last year highlighted the CX-5 as being at the forefront of Mazda’s drive to equip all models with AEB.

Mazda have now gone a step further by incorporating the technology in their recently-launched all-new Mazda6 range, available from £19,595.

Steve Tomlinson, Head of Fleet at Mazda, said: “Safety is a fundamental issue for all drivers whether selecting their new company car or buying a vehicle privately.

“Mazda is ahead of many other manufacturers in terms of making vital safety-focused technology accessible.”

“Cost reduction is an agenda-topping issue for fleet decision-makers.

Operating at speeds of up to 19mph, ‘Smart City Brake Support’ uses a laser sensor to detect a vehicle in front of the car.

If the driver fails to slow the vehicle appropriately, or take avoiding action, the system automatically activates the brakes and reduces the engine output.

This helps to avoid collisions or mitigate the damage from rear-end collisions at low speeds, which are among the most common accidents.

The all-new Mazda6 and CX-5 also feature Mazda’s SKYACTIV-Body, which means the vehicle’s body has a highly rigid structure.

In the event of a crash, the straight and continuous body lines absorb the load by dispersing it in multiple directions, thus greatly improving the safety of occupants.

There is also a plethora of other standard safety equipment available on both the CX-5 and Mazda6 models.

Image courtesy of Touring Club Suisse/Schweiz/Svizzero TCS, with thanks.