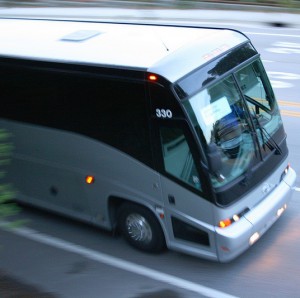 Bus and coach registrations are down 21.3% in the first half of 2013, with June suffering a 30.6% drop on last year’s corresponding period.

Just 3,861 units have been registered this year, with June contributing only 636 units; converted bus registrations meanwhile fell 20% to 333 units.

Wendy Williamson, Bus and Coach Manager at Society of Motor Manufacturers and Traders, said: “Although coaches posted a 12.5% increase in the month, the overall purpose-built bus and coach total fell 39.5%.

“Last year, the 2012 Olympics led to a sharp rise in registrations for the first half of the year with volumes falling after July.

“This should see registrations for the second half of 2013 level off, stabilising for the end of the year.”

Image courtesy of Richard Masoner / Cyclelicious, with thanks.