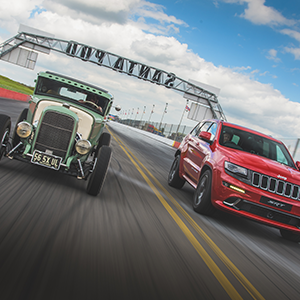 Jeep has once again demonstrated the awesome 6.4-litre V8 HEMI-engined Grand Cherokee SRT by taking it to the home of UK drag racing, Santa Pod, and testing it against a retro HEMI-engined Hot Rod Coupe in a head-to-head quarter-mile dash.

On one of the most famous drag strips in the world, UK drag racing champion Stuart Doignie launched the Jeep off the start line and down the quarter-mile straight in 13.5 seconds, defeating the Coupe, driven by Kelvin Dunn, by just 0.9 seconds.

Delivering a massive 468hp and packed full of high-performance technologies including Launch Control, Doignie helped the Jeep Grand Cherokee SRT register an impressive 0-62mph speed of 4.5 seconds while covering the 1320ft stretch in less than 14 seconds.

“I was hugely impressed by the raw power and speed of the Grand Cherokee SRT,” said Doignie. 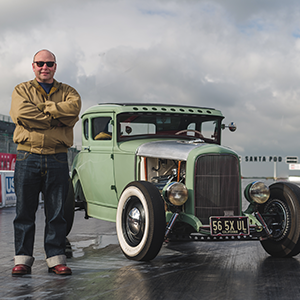 “I’ve driven plenty of dragster vehicles at Santa Pod but never a car built purely for the road. It’s immensely quick off the line and powered through the finish gantry. It was an epically close race with the HEMI Coupe but I was glad to keep up my great record at Santa Pod with another win.” 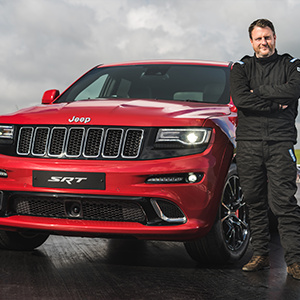 It’s the second time the Grand Cherokee SRT has come out victorious in a full-throttle race against unfamiliar opposition following last year’s victory against an aerobatic twister plane at Blyton Park race track. Watch the SRT vs plane.