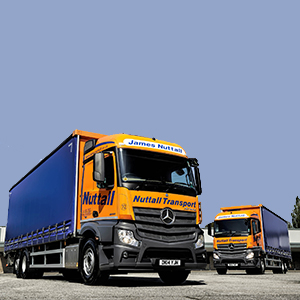 The Rochdale-based operators have purchased a pair of 26tonne New Actros 2532L rigids from Enza.

Both have StreamSpace cabs and lifting rear axles with single tyres, while their curtainside bodies are by Lawrence David.

James Nuttall, Managing Director, said: “The demonstrator performed exactly as Mercedes-Benz and its distributor had promised it would.

“Fuel economy was as we’d been led to expect, and certainly favourable, the New Actros returning an average over the period of 11.6mpg, and a weekly high of 12.4mpg.

“What struck me particularly, though, was the AdBlue consumption, which was significantly lower than we’re used to seeing from our Euro V trucks.

“We tried another manufacturer’s Euro VI vehicle shortly after the New Actros but decided to place the order with Mercedes-Benz because overall, once we’d factored in the Repair and Maintenance agreement, its package was more cost-effective over five years.”

They will be inspected and serviced by the workshop team at Enza’s Trafford Park branch.