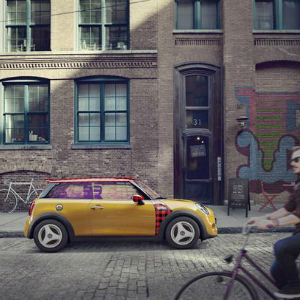 Vauxhall, Honda, MG and Mini have all embraced April Fools Day this year and each come out with individual, fantastical ideas for the next big thing. From invisible cars to emoji number plates, and even a full sized kinetic car…I wonder if we’ll ever see these April Fool jokes as a reality.

The ADAM C is powered by a state-of-the-art kinetic mechanism that’s not too dissimilar to those found in children’s clockwork toys (the ‘C’ stands for clockwork).

Although on the surface it has the same flair and sleek styling as its more conventional counterpart, inside Vauxhall has ditched the engine, fuel tank and battery and replaced them with simple, yet innovative wind-up technology that propels the vehicle.

The result? Zero running costs and no damage to the environment. All without compromising performance.

In terms of efficiency and sustainability it’s a no brainer. What’s more, when you run out of juice, you won’t need to waste time looking for somewhere to refuel. Simply jump out and wind the car up. Wherever you are. For the health and fitness fans among us, winding the clockwork mechanism burns serious calories. The rotating motion offers an incredible cardio and strength workout. By exercising your chest, shoulders, arms and core muscles, a 65kg person can expect to burn over 400 calories in just 15 minutes of winding.

Honda’s plans for emoji registration plates are in response to demand from younger car buyers across the UK, and initial talks are planned with the Driver & Vehicle Licensing Agency in an endeavour to exclusively launch the new plates in early 2017.

In research conducted with UK consumers earlier this year, 96% of respondents aged under 30 indicated a preference for emoji plates over the traditional car license plate. 97% of those questioned admit they now use emoji faces as their main method of expressing an emotion or idea in texts and instant messages.

Honda announced its pioneering plan with the release of an emoji plate including images of the Hinomaru “circle of the sun” Japanese flag, symbolic of its roots as a Japanese automobile manufacturer, the red car and those first car keys.

Engineers and designers based at Longbridge have manufactured the world’s first invisible car. MG has brought in renowned experts in this field to assist with producing such an advanced model, as this is a first not only for the Birmingham-based manufacturer but for the world.

Matthew Cheyne, Head of Sales and Marketing for MG, said: “We were really honoured to have Professor C.Thrue and Chief Designer Avril F’ouil working with us on this new project. The site at Longbridge has been buzzing with excitement and people are really enthusiastic about working on something so advanced.

“At first we had some trouble with the cars, as people kept walking into them or we’d misplace them on the site. As soon as we placed the iconic MG badge on the front of them, using non-invisible materials, we were able to find them much more easily.

“At first we couldn’t see the point in doing something like this and we know that some people won’t think the car is much to look at, but we are proud of creating something so advanced.

“It definitely makes parking in busy cities easier, as traffic wardens can’t see the car to put a ticket on!”

Avant-garde and upcycled, the MINI Hipster Hatch is effortlessly stylish and the perfect companion for a spot of vintage clothes shopping, or indeed the odd trip to the market for artisan kale.

Motorists no longer have to settle for the natural colour of their surroundings (#nofilter), thanks to the exclusive and fully adjustable Instagram filter on all exterior window glass. Live life in LO-FI. Or Clarendon. Or Crema. In fact, occupants can choose from 12 pre-loaded Instagram window filters and turn any journey into a nostalgic memory at the touch of a button.

The stonewash denim upholstery means the four seater MINI Hipster Hatch is a match for even the tightest pair of jeans, allowing the driver and passengers to coordinate their outfits accordingly.

Inside, a twin-deck cassette player harks back to when it was all about the music, allowing occupants to sidestep the mainstream with their own mixtapes. On the outside, MINI Hipster Hatch boasts alloy wheels carefully upcycled by hand from previous alloy wheels.