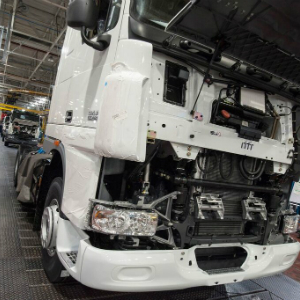 Exports of British-built commercial vehicles (CVs) jumped bymore than a third last year, with almost nine in 10 destined for EU countries, according to figures published today by the Society of Motor Manufacturers and Traders (SMMT). 47,052  of the 94,479 CVs made in Britain left UK shores in 2015 – up 34.7% over the previous year, and accounting for half (49.8%) of overall production. Of these, 41,428 (88%) went to markets within the EU.

The figures are a further indication of the recovery of Britain’s CV sector, driven by resurgent European markets where new registrations increased 12.4% in 2015.1 That the majority of British commercials exported were built for sale on the continent is another demonstration of the importance of the EU as a trading partner for the UK automotive industry. In a recent survey of SMMT members, access to European markets came out as the top benefit of EU membership for their businesses.2

British CV manufacturing is in demand worldwide, with varying trends emerging within different market segments. Almost three quarters (71.6%) of CVs exported in 2015 were vans – with every single one destined for the EU, while Europe was also the biggest market for light 4x4s and smaller, rigid 2-axle trucks.

The picture was very different for buses, however. While two thirds (66.5%) of buses built in Britain were sold here, particularly strong demand for double-deckers in Asia resulted in 90.3% of UK bus exports, amounting to some 1,025 vehicles, being shipped to the region.

Large trucks, meanwhile, were most popular in Oceania, with 76.8% of the rigid 3/4-axle and articulated trucks exported from the UK in 2015 finding a home there.

Mike Hawes, SMMT Chief Executive, said, “British-built vans, trucks and buses are playing an increasing role in the global economy, with vehicles being sent to countries on every continent. The growth in overseas demand for high quality commercials is a huge credit to Britain’s commercial vehicle makers, and serves as a timely reminder of the EU’s vital importance as a trading partner to UK Automotive.”

Exports of UK-built commercial vehicles in 2015