Toyota is extending customer choice and opening up a completely new market proposition with its all-new range of Proace Vans. A choice of two grades, three body sizes and two wheelbase lengths are available, together with different body styles that take Proace Van into all areas of the medium duty van (MDV) segment for the first time.

The line-up includes the first Proace Van Compact, creating a new proposition in the market by providing the cargo capacity of a medium-size van within the footprint of a compact van (CDV). A combi version seating up to nine and a platform cab ready for conversions will also be available.

Five diesel engines are available, according to market, with power outputs from 94 to 178bhp and a choice of manual, robotised manual and automatic transmissions.

Specification highlights include optional power sliding side doors, three front seats (including Compact) and a new Smart Cargo system that features an opening bulkhead and lifting front passenger seat base to increase load length capacity by 1.16m and overall load volume by an extra half a cubic metre. 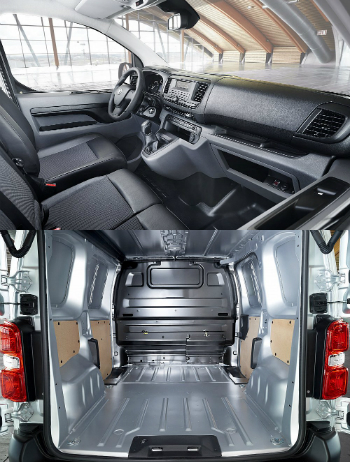 Safety standards have been further increased. Proace Van has a top five-star Euro NCAP crash test rating and will be offered with the option of two Toyota Safety Sense packages providing a choice of active safety and driver assistance features.

The all-new Toyota Proace Van range of light commercial vehicles will make its world debut at the Commercial Vehicle Show at the NEC in Birmingham from 26 to 28 April. It will be well-placed to take advantage of the strong recovery in the European LCV market in recent years, with sales volumes rising by more than 12 per cent in 2015. Toyota expects sales to reach 2.2 million in 2016. MDVs account for around 28 per cent of sales, approximately 640,000 units.

UK order books will open in late April, ahead of the official start of sales in September. Prices and specifications will be announced soon.