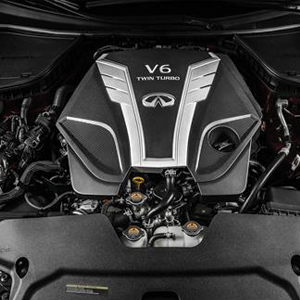 The INFINITI 3.0-litre twin-turbo V6 petrol engine has again been named as one of Ward’s 10 Best Engines for 2018. The VR-series engine has the distinction of being one of just two engines on the list to receive the award for a second consecutive year.

Available in the INFINITI Q50 sports saloon and the Q60 sports coupe, the advanced VR-series engine delivers 400 horsepower and 475 NM of torque.

Tom Murphy, Managing Editor, WardsAuto described the engine as ‘smooth and refined, yet devastatingly fast, with brilliant midrange acceleration and an uncanny ability to get off the line in a hurry.’

Boasting a series of innovative technologies the 3.0-litre V6 twin-turbo engine delivers an engaging driving experience while remaining efficient thanks to the use of direct-injection, minimal mechanical friction and turbocharging. Lightweight aluminium construction also helps to keep vehicle weight low and increases engine response to deliver an engaging driving experience.

The VR-series engine is the successor to INFINITI’s VQ engine, which appeared on the Ward’s 10 Best Engines list for 14 consecutive years.