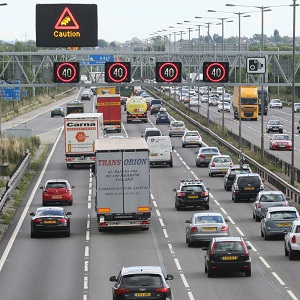 In a pioneering move, the government company responsible for the country’s motorways and major A roads has joined forces with the Freight Transport Association (FTA) to offer bespoke safety training for drivers who travel on smart motorways.

Aimed at commercial and haulage drivers, the course has been designed to provide practical, relevant training.

The eight hour, single day course covers the past, present and future of smart motorways, the different signals on the network, driver behaviour and the role of traffic officers.

A key aspect of the course is that it now integrates into the Driver Certificate of Professional Competence (Driver CPC), the standard qualification for which all professional bus, coach and lorry drivers must complete 35 hours of training every five years.

Hauliers are among the most frequent users of smart motorways so we want to ensure we are providing as much support as we can to ensure those journeys are as safe as possible.

Smart motorways reduce congestion, improve journey time reliability and add much needed capacity to some of the most congested sections of motorway and we are delighted with the take up to date of this course.

We urge any haulier who wants to sharpen up their skills to sign up.

Pertemps, one of the leading training providers has agreed to offer the training, and Müller is one of the first organisations to take it on.

It’s essential that our drivers are fully equipped to deal with their surroundings. We are delighted to be working with Highways England on this training, from concept to delivery, and we continue to work together closely, which not only benefits the business, but the overall road network.

It is clear to us that smart motorways are the future in the UK and their use has undoubtedly reduced congestion and improved safety on some of the busiest roads.

As an employer of over 7000 drivers nationwide we are actively working with and supporting Highways England to promote the benefits of smart motorways within the haulage industry.

FTA is conscious that hauliers would appreciate more advice about driving on smart motorways. That is why FTA has worked in partnership with Highways England to produce the training module which is now approved for use on the Driver CPC course programme.

This is the right way forward – providing drivers with true guidance on how to use the network and not adding confusion about which parts of the road they can use and when. That has been borne out by driver feedback on the pilot courses we have run.

It also demonstrates the need to respect the Red X signs set up when there is a problem on the network and provides assurance that these lanes are vital tool in keeping drivers safe in emergency situations.

Any company which wishes to enrol their drivers on the training should email: SPTC_Driver_Education_Course@highwaysengland.co.uk

Highways England’s call to hauliers comes alongside a number of other initiatives related to commercial vehicle safety launched at this year’s Commercial Vehicle Show.

As part of this comes the use of virtual reality to reduce the risk of commercial vehicle drivers being involved in incidents as they travel up and down the country.