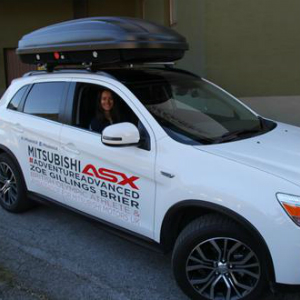 British Olympic Snowboard X athlete, Zoe Gillings-Brier, is using a Halo dashcam as she begins her winter season of training and competing in Europe.

Zoe is preparing for the 2018 Winter Olympics in South Korea, but her hectic training schedule will see her driving through 10 countries, covering 12,000 miles between resorts in a Mitsubishi ASX.

“As a Mitsubishi brand ambassador and British Olympic athlete I drive a tremendous amount each year, both in the UK and in Europe,” Zoe explains. “This winter season I am putting more miles in than I ever have before. With the Halo dashcam on board I feel much safer knowing that if I do have an accident while I’m driving or parked up, then it will be recorded.”

Zoe installed the Halo dashcam in her Mitsubishi ASX herself – one camera sticks to the windscreen in front of the rear-view mirror and then a rear-facing camera sticks on the rear window. The lead from the rear camera is then trailed to the front camera and hidden behind the car’s interior panels.

The two cameras in Halo have a wide field of view (150°) and record footage on to an SD memory card (included in the box).

Zoe has watched some of the footage from her drives so far this year – on icy, winding roads up in the mountains – and she loves how the PC ‘Halo Player’ software lets her see where she’s been in Google Maps.

“The Halo is awesome,” she says. “Not only does it record out of the front and the rear of the car, it also records your route so you can watch the footage and then see where that footage was captured in Google Maps.”

Zoe also likes the ‘parking protection’ function that Halo has when it is ‘hard-wired’ in to the car’s battery. Cars left parked in ski resorts often get hit by people carrying skis and snowboards on their shoulders. And when parked cars are covered in snow, they are often completely hidden from view and can get hit by other vehicles. Halo still protects your vehicle even when it is parked up as it starts recording if it senses any movement in front of the camera lenses or when the in-built G-force sensor senses the car move or take an impact.

Zoe adds: “Being able to fully record all of my journeys with the Road Angel Halo is an awesome ability that I simply couldn’t live without now. It gives me so much peace of mind on every journey. In this day and age of insurance scams, accidents and criminal damage I think a Halo dashcam is imperative for every motorist.”

Carys Kerr from the Road Angel Group says: “We are thrilled that Zoe is discovering the benefits of having a Halo dashcam as she starts driving between her winter training venues. So many of us now drive to Europe for a wintersports holiday, but having an accident away from home and dealing with national authorities who speak a different language can be extra stressful. With Halo you have video footage that can be used to play back exactly what happened and overcome any language barriers.”

Halo has a recommended retail price of £199.99 and is available through all Road Angel resellers, mainly online.