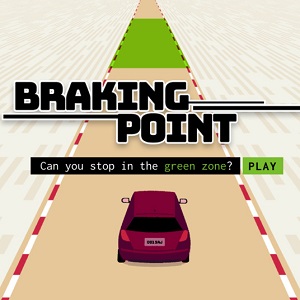 Results from a new driving simulation game reveal that the vast majority of people don’t know when to hit the brakes — with many failing to get it right on their second or even third attempts.

Siegfried & Jensen, the firm behind the game, wanted to see how good drivers are at judging the stopping distance of a car, so it created a simulation to test this and teach people about the dangers of tailgating and failing to respond quickly enough.

Of the 1,838 consumers who tested the game, 85% failed to judge the stopping distance correctly the first time. In fact, it took players an average of 4.53 attempts before they were correctly able to stop quickly enough.

It also found that women’s reactions were marginally better than men’s, with 15% of women succeeding on their first attempt compared to 14% of men.

You can see how your skills compare using the game here.

Ned Siegfried, President of Siegfried & Jensen, comments: “This game is a fun reminder about safety behind the wheel, but failing to react quickly enough when driving in real life is anything but fun.

“Rear-end collisions account for 38% of road accidents in the UK*, but these crashes are often all too easy to avoid. Tailgating — driving too close to the car in front — is a key cause of rear-end collisions, so you can significantly reduce your chances of getting involved in a crash simply by making sure there’s enough space between your car and the one in front.”