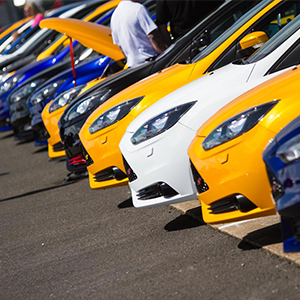 Fans of Britain’s best-selling car brand are set for a real treat later this summer, with the quest to find the UK’s ‘Ultimate Ford’ as the centrepiece of FordFest 2017, which takes place at Santa Pod Raceway on September 17th.

A brand new feature for the fastest growing Ford Show in the UK will be the inaugural Ultimate Ford event. The organisers of the show are on the lookout for the Ford that most stands out from the crowd; one that not only can talk the talk, but can also walk the walk.

A total of 20 carefully chosen Fords will compete across a series of 3 points-based challenges to be crowned the Ultimate Ford, with entries to the competition available.

The first of the three challenges will be ‘Show Preparation’. Judges will be looking for attention to detail and awarding high scores for those that have really put the effort in. This will be followed by a ‘Handling Course’, which not only tests the handling of each Ford but also its driver’s skills.

The final showdown will be a Drag Race, taking place on Santa Pod’s famous strip. The ¼ mile battle will find the top fastest Fords, with points awarded in order of times. The car with the most points from all three challenges will be awarded the ‘Ultimate Ford’ accolade on the day.

The new feature is just one of a serious of crowd-pullers as FordFest returns for its third year.

Around 2000 cars are expected to be on display, with classic and moderns from Anglia to Zodiac or Focus to B-Max.

A key feature this year will be a special display to mark 100 years of Ford Commercial Vehicles in the UK, while the drag strip itself will be active, with a Ford-themed ‘Run what Ya Brung’ event taking place for show visitors.

Event organiser Kat Chappell said: “The great thing about FordFest is that it brings together new Fords and old in a celebration of the marque. Anyone who loves Fords will love this event.”

As well as the ‘Run What Ya Brung’, the drag strip will also play host to Fireforce 3, Santa Pod’s very own Jet Car, capable of a sub-six second quarter mile and speeds in excess of 300mph.

A substantial retail village, full of new and used parts, clothing and souvenirs is also a major highlight, as is the party atmosphere of the event itself, with camping available from midday on Saturday September 16, plus a bar and live entertainment.

Other highlights include magazine cover style photo shoots from Blue Pig Photography, where showgoers can have their car modelled on the front of a mag for just £40, plus a Show and Shine entrance photography by Photography UK and stands from the leading Ford titles, Fast Ford and Classic Ford.

FordFest is part of a family of Ford events celebrating Europe’s love for the famous blue oval brand, including the Classic Ford Show and Ford Fair.