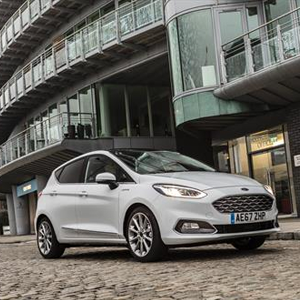 “As we develop our strategy to become the most trusted mobility company, designing smart vehicles for a smart world, we will continue to reshape the organization to deliver the most value for our customers and all of our stakeholders,” said Jim Hackett, president and CEO. “The changes we are announcing today will further align resources and improve efficiencies throughout our global markets and operations. At the same time, I want to recognize the truly significant contributions of the senior leaders departing from Ford and thank them for their many years of service.”

In this expanded position, Kumar will continue to lead the transformation of Lincoln as a world-class luxury brand, a role he has held since September 2014.

He also will lead the Marketing function shifting investments towards product categories that play to Ford’s strengths, and developing more effective brand communications including digital services, emobility and autonomy. This supports Ford’s smart vehicles in a smart world vision and includes the evolution of a more efficient distribution model using digital platforms.

With nearly 30 years of global experience within Ford and Lincoln, Galhotra has a deep understanding of product development, business strategy and the role that marketing, sales and service plays within the process.

At the same time, Stephen Odell, 62, executive vice president, Global Marketing, Sales and Service has elected to retire, after 37 years of service at Ford.

During his career, he was instrumental in leading the development and implementation of Ford’s European transformation plan with an emphasis on achieving profitable growth through an intense focus on new products, a strong brand and increased cost efficiency. He also served six years with Mazda on three contents and as CEO of Volvo.

“Stephen has made significant contributions to Ford, including laying the groundwork for our turnaround in Europe and positioning us for success as we continue to create a world-class global marketing and sales organization,” said Hackett. “In addition, he has mentored and helped develop many of our next generation of leaders. We appreciate his many years of service and wish him well in the future.”

Ford also is announcing the following changes in Global Operations and Ford of Europe.

In this role, she is responsible for driving quality processes throughout the design and production of Ford vehicles, and for new model launches globally, ensuring alignment throughout the business operations. Joining Ford in 1984, Cash has spent her entire career with Ford in Manufacturing. She previously was vice president, Manufacturing, Ford of Europe, based in Cologne, Germany.

Cash succeeds Bennie Fowler, 61, group vice president, Quality and New Model Launch, who has elected to retire. During his 27-year career at Ford, Fowler has held many key positions in the heart of the company’s business operations, including in Engineering, Manufacturing and Product Development, and began serving in leadership roles early in his career.

Fowler directly influenced the quality of Ford’s newest, current and future model vehicles, launching over 900 vehicles, 163 powertrain programs and 19 plants around the world. Under Fowler’s leadership, Ford’s quality improved globally and jumped to No. 2 of all non-premium brands in J.D. Power’s 2017 Initial Quality Study – Ford’s best-ever ranking in the annual study now in its 31st year.

“Ford has made significant strides in improving vehicle quality globally under Bennie’s leadership,” said Hackett. “He has an absolute unwavering commitment to continuous improvement and we are grateful for his contributions to our success. We wish him all the best.”

In this newly created position based in Cologne, Behrendt will be responsible for all joint ventures and alliances in Europe, including the development of new arrangements to support the company’s business growth. She also will be part of the leadership team responsible for driving the region’s strategic initiatives.

Felicia Fields, 52, group vice president, Human Resources, has elected to retire after more than 30 years with the company. Appointed to her current position in 2008, Fields was instrumental in leading the company’s efforts in talent management, workforce planning, organizational development, recruiting and leadership development as the company recovered from the financial crisis.

“Felicia has been an outstanding leader and we thank her for the tremendous contributions she has made to Ford throughout her career,” said Hackett. “She has long been a trusted source of guidance and leadership, always putting our employees first, and working to make Ford a great place to work.”

Kiersten Robinson, 47, executive director of Human Resources, Global Markets, will serve as the company’s interim Human Resources leader, effective Nov. 1. Robinson has a wealth of global experience in human resources spanning more than 25 years, including serving in Europe, Asia Pacific and most recently in the Americas.

John Casesa, 55, group vice president, Global Strategy, also has elected to leave the company, effective Nov. 1, as the company realigns the global strategy function. During his time at Ford, Casesa led the effort to develop the global strategy team and processes to better align the company’s business unit and skill team leaders around the world. Going forward, the Global Strategy function now will report to Bob Shanks, executive vice president and CFO.

“We thank John for his leadership in growing our global strategy capabilities, particularly related to our progress on mobility, electrification and transportation services,” said Hackett. “We are clearly focused on delivering smart vehicles, connected to a smart transportation operating system, and have begun building out several of our new business models.”