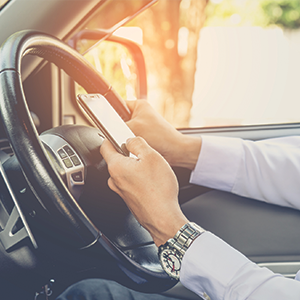 More than two-thirds (68 per cent) of UK businesses are worried their employees are using mobile phones to text or access the internet while driving for work, research1 by TomTom Telematics has revealed.

The study also found 33 per cent of organisations still have not taken steps to prevent employees from using mobile phones while driving, whether through specific policies, training or education.

This is despite the introduction of harsher penalties for people caught using their mobile phone while driving, which came into force on March 1 this year. The standard fine doubled from £100 to £200 and drivers can now be given a penalty of six points on their licence.

“The World Health Organisation has called mobile phone use a ‘serious and growing threat to road safety’2 and these results further highlight the extent of the problem faced by businesses,” said Beverley Wise, Director UK & Ireland at TomTom Telematics. “It’s a problem employers’ must tackle, however, if they are to demonstrate a genuine commitment to the wellbeing of their staff.

“A clear policy on the use of mobile phones should form part of a best pratice approach to road safety, but cultural change is also vital. Ingrained habits are hard to break but continuous training, education and communication can help to change employees’ mindsets and encourage a greater focus on safe driving.”

The research also revealed that 68 per cent of organisations still allow hands-free use of mobile phones by employees driving for business purposes. However, studies have shown that talking on a hands-free phone can be as distracting as talking on a hand-held mobile.

Wise added: “There is evidence to suggest hands-free use of mobile phones can be highly distracting so businesses should consider this when deciding how far policies extend. Technology such as telematics can also play an important role in helping to identify when employees are driving distracted by continuously monitoring performance. Incidences of harsh steering or braking, for example, might be indicative of greater problems that require attention.”