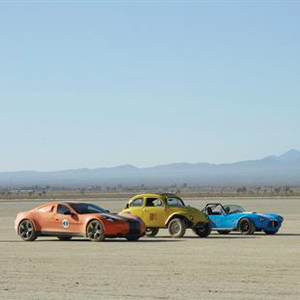 The world’s only fully electric monster truck, a 200mph EV superbike and an all-electric 240mph zero emissions supercar prototype have all been brought together in a new film by energy provider E.ON.

The ‘Freedom is Electric’ campaign highlights the diversity of the world of electric vehicles, charged using E.ON’s fast-charging technology, which will be available in thousands of locations across Europe.

The ultra-fast charging network, offering 150 kW of charging power with a modular upgrade option to 350 kW, will enable charging of a full 400 kilometres range battery in only 20-30 minutes. E.ON is targeting 10,000 charging points throughout Europe by 2020.

In the UK E.ON has already launched a new tariff for electric and hybrid vehicle owners which offers customers access to a competitive day rate, and a night rate priced 33% below the day rate for use when many electric and hybrid car owners will choose to charge their vehicle.

Set against a barren desert landscape, the film, entitled ‘Freedom is Electric’, features a range of cars and bikes traditionally perceived to be gas guzzling machines. In reality these are both converted and new-concept electric vehicles, developed by individuals or small companies with a real passion for zero emissions technology.

For the film it wasn’t just electric in front of the camera – all the filming equipment, camera rigs and drones used in the shoot were electrically powered to promote the versatility and ability of electric vehicles.

One of those vehicles is Bigfoot #20, the world’s first all-electric monster truck, which is powered by 30 separate batteries totalling 360 volts. An additional six batteries power the brakes and steering systems.

Also running in the desert is the Tachyon Speed by Raesr, an electric hyper-car prototype developed from the ground up for the ultimate in road and track performance. This was the first outing for the carbon fibre car which carries 1,250+ bhp, 3,650 lbs-ft of torque and estimated performance figures of 0-60 in less than 3 seconds, 0-120 in under 7 seconds and a top speed of 240+ mph.

The film is part of E.ON’s new global campaign which reflects its intent to deliver innovative customer solutions that help create a better tomorrow. E.ON’s electric vehicle charging infrastructure is part of a range of innovative new solutions for customers including solar and battery storage technology, smart appliances and intelligent homes.

Anthony Ainsworth, Global Head of Marketing at E.ON, said: “By bringing together these amazing vehicles and their equally passionate and inspiring owners we wanted to help people to reconsider what they think they know about electric vehicles, how they view energy and what they think about E.ON and its moves to be a force for change in energy.

“Our aim is clear, to remove the perceived barriers of electric vehicles to really help improve the electric future for our customers. We are doing this by developing a growing network of charging points throughout Europe; whether at home, at work or on the go, from the city to the mountains. We are investing in superfast charging technology including the first superfast charging station in Germany, being installed later this year, meaning EV becomes easy and drivers can get back on the road quicker than ever before.”

E.ON has invested significantly in electric vehicle technology, including expanding its network of charging points across Europe and investing in superfast charging stations, in order to remove barriers to the widespread use of electric vehicles.