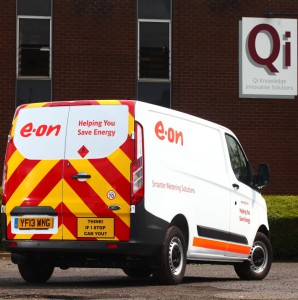 E.ON are rolling out 118 new Ford Transit Custom vans for use by their meter fitters nationwide.

The vehicles are all 310 short wheelbase models equipped with the Dagenham-built 100PS 2.2 TDCi power unit, and add to the energy company’s 2,000-strong fleet.

They will begin service after conversion by Qi Van Systems, including the fitment of special load area racking, Trakm8 telematics and an AVI alarm system.

The vehicles are the first to join E.ON which have been through the Whole Vehicle Type Approval ‘enhancement’ scheme, which covers after-market equipment additions.

Stephen Gafson, Sales Manager at Ford, said: “Ford has enjoyed a long and mutually successful business relationship with E.ON and I’m delighted to see them place a large order for the multi-award-winning Transit Custom.

“The new van is already well on the way to establishing its own market niche, and will be key to the continued success of the Transit range.”

The Ford Transit Custom offers fuel economy from 46.3mpg, thanks largely to fuel-saving ECOnetic technologies such as Auto-Start-Stop and Smart Regenerative Charging.

It also boasts class-leading load-carrying ability, including features such as the load-through hatch in the bulkhead for extra-long items, and an integrated fold-away roof rack.

Ford have sold more than 7,500 Transit Custom vans so far this year – exceeding targets to achieve the expected first year UK volume of 10,000.