Double Win For Citroën At The Carbuyer Awards 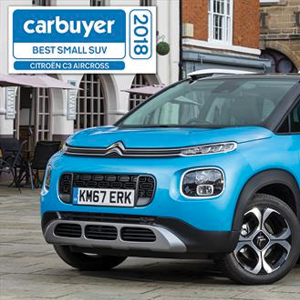 The recently launched C3 Aircross was praised for its unique personality, versatility and class-leading boot space. The Citroën Grand C4 Picasso, already a firm family favourite, was recognised once again for its comfort, superior spaciousness and versatile interior.

Carbuyer announced its ‘Best Cars’ for 2018 at the Curzon Bloomsbury Cinema in London earlier this morning. The awards celebrate the best cars in the UK and are driven by traffic to the popular Best Cars section on the Carbuyer website, meaning the award categories are effectively selected by Carbuyer users. The winners in each category are then chosen by members of the dedicated Carbuyer road-test team, who score the vehicles in a number of areas, including running costs, performance, reliability and safety.

Stuart Milne, Editor at Carbuyer, said; “New Citroën C3 Aircross is the latest in a line of funky cars from Citroën, a transformed brand brimming with confidence. It looks different to anything else on the road and sports a stylish interior that’s bursting with personality. It’s also one of the more spacious compact SUVs and has a big boot – perfect for growing families – and that seals the deal for our Best Small SUV for 2018.”

Milne also commented; “It’s not hard to understand why the Citroën Grand C4 Picasso takes Carbuyer’s Best Seven-Seater award for the third year in succession. In a world moving to SUVs, the uncompromising shape of an MPV simply delivers more usable space for seven occupants. Couple that with the Grand C4 Picasso’s stunning looks, willing yet economical engines and light and airy interior, and it’s clear why it remains one of our favourite new cars.”

Souad Wrixen, Citroën UK’s Marketing Director, said; “We are honoured that New C3 Aircross Compact SUV has won its first UK award at the Carbuyer Best Car Awards 2018. Adding this accolade to its recently announced five-star Euro NCAP safety rating reinforces the numerous qualities this compact SUV has to offer. Winning for the third year in a row, Grand C4 Picasso is testament to Citroën’s understanding of what customers really want and need in a large, practical and stylish family car. Our products are inspired by our customers, which is why we recently introduced our new brand signature ‘Inspired By You’. These awards prove just that – even more so because the categories are largely defined by Carbuyer users.“

These extra wins, on top of the two headline accolades, add up to a total of five Carbuyer Best Cars victories for Citroën, covering three models from the brand’s passenger car range