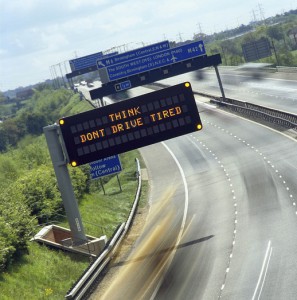 Drivers are being urged to wake up to the dangers of nodding off at the wheel, after figures showed most motorists ignore basic rest advice.

Research also showed 9% do not willingly stop at all on big drives, while just 45% get the adequate seven-hour sleep the night before.

Studies have discovered that after only five hours’ sleep, there is just a 10% chance of staying fully awake on a long journey.

Julie Townsend, Deputy Chief Executive of Brake, said: “A large proportion of the driving public are scarily confident they can push on through on long drives without stopping.

“In reality, regular breaks – at least every two hours – are essential for staying alert and awake, as is getting plenty of sleep the night before.

“Sleepiness can catch you unawares at the wheel and it only takes a couple of seconds on a motorway to cause absolute carnage.”

Statistics also revealed that 50% of male drivers have driven for four hours or more without stopping, compared to 31% of females.

Meanwhile, 35% of drivers admit sometimes or always trying to push on if they feel sleepy at the wheel.

Males are again the bigger culprits, with 38% of men admitting they do this compared to 31% of females.

Fleets are being urged to pay even stronger attention, as an estimated four in ten tired driver crashes involve a commercial vehicle driver.

Brake are recommending regular testing of fleet drivers for sleep apnoea, a condition though to be particularly widespread among HGV drivers.

Sleep apnoea is a treatable condition that makes falling asleep at the wheel much more likely.

Brake also believe the rules controlling hours that can be driven by truck and bus drivers should be extended to cover fleet drivers in vans and cars.

Rob Miles, Head of Motor at Direct Line, said: “Tiredness and driving are a deadly combination.

“Not only is there a risk of falling asleep at the wheel, but when we are tired our reactions and awareness of our surroundings are not as sharp as they would normally be.

“Whilst tired drivers may think that stopping for a break will increase their journey time, it’s not worth the risk to themselves, their passengers or other road users.

“It is better to get there late than not to arrive at all.”

Driver tiredness is one of the biggest killers on UK roads, causing an estimated one in five deaths on trunk roads.

In 2011 in Great Britain, it was reported 84 people were killed and 420 suffered serious injuries in tiredness-related crashes.

However, the real figure could be higher, because it can be difficult to prove when a crash is caused by a driver falling asleep.

They tend to be high-speed crashes, because drivers do not brake before crashing, so the risk of death or serious injury is greater.

Brake support recent government proposals to allow drivers who oversleep at motorway service stations to pay for their parking retrospectively to avoid a fine.

However, the charity are calling for more to be done to help drivers by creating more stopping places for drivers to take a break.

They are also campaigning for more government advertising on the risks of driving tired.

The charity have issued the following advice to motorists regarding tiredness at the wheel: