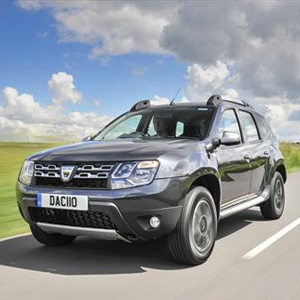 The Dacia Duster won the Small SUV & 4X4 title at the seventh annual Green Apple Awards held this morning at the Houses of Parliament. The rugged and robust Duster was voted into first place for the third consecutive year thanks to its affordability, efficiency and running costs.

The automotive-based honours at The Green Apple Awards, organised by the Midlands-based The Green Organisation, are judged by members of the Midland Group of Motoring Writers. Marks were awarded by judges for the way a car drives and behaves in the real world, away from the testing laboratory.

One of the Midland Group judges wrote: “The Dacia Duster continues to be extraordinarily good value for money and with proven Renault technology and powertrains underneath it doesn’t cut corners when it comes to performance and efficiency either.”

Louise O’Sullivan, Head of Dacia UK said: “We’re delighted the Duster, for the third year in a row, has been recognised by such a well-respected environmental group as the Green Organisation. Not only is the Duster the perfect SUV for savvy buyers thanks to its affordability, ruggedness and impressive reliability but the Green Apple judges have proved just how economical and efficient the Duster is too.”

The multiple award-winning Duster is the most affordable SUV on the UK market – priced from £9,495. The Duster is available in a choice of four trim levels, with 1.6-litre naturally aspirated (SCe 115) or 1.2-litre turbo charged petrol (TCe 125) or 1.5-litre turbodiesel (dCi 110) engines and in 4×2 or 4×4 set-ups. A six-speed EDC (Efficient Dual Clutch) automatic gearbox is also available and despite its sophistication compared to rival systems is the most affordable automatic crossover on sale.

The Green Organisation, based in Northamptonshire, was established in 1994 as an international, independent, non-profit, non-political, non-activist environment group, dedicated to recognising, rewarding and promoting environmental best practice around the world and invites entries from all parts of industry for its annual Green Apple Awards.