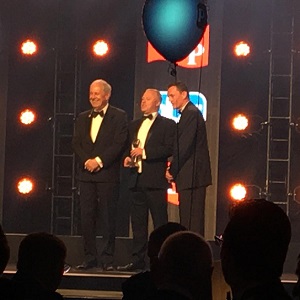 The event is the biggest, most prestigious awards ceremony in the UK body repair industry, and sees companies nominate and then present awards to their providers and partners. Over 800 professionals from across the body repair industry gathered at Battersea Evolution for an evening of celebration and entertainment, including Nationwide Manchester Trafford Park General Manager, Darren Pennington.

Darren was on hand to collect the LV= award on behalf of himself and his team, he said: “I’d like to say again how incredible the team at Trafford Park have been, our success is a real team effort and I believe it’s a very well-deserved accolade for the team. I’m incredibly proud of them all. Thank you also to LV= for the award, and for the great partnership we have.”

Nationwide’s people are central to their success, and the team are delighted that their continuous hard-work and commitment to put their customers first has been recognised.

Michael Wilmshurst, Nationwide CEO, said: “I’m delighted for our team at Manchester Trafford Park, it’s a fantastic achievement to be recognised. The teamwork Darren and his team display is admirable and their success would not have been achieved if it wasn’t for their hard work and commitment to delivering for our customers. Well done and thank you to our winners and our nominees.”