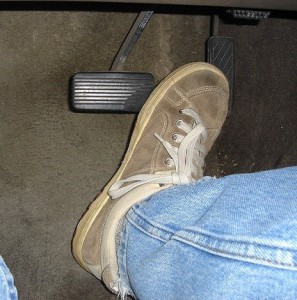 The study, by Kwik Fit, shows 59% of British drivers are putting their own and the safety of others at risk by not using their car’s brakes as advised in the Highway Code.

1.7million drivers admit to having caused an accident through their own braking errors, while 4.3million say they have been in an accident as a result of someone else’s mistake when braking.

Kwik Fit’s research reveals many motorists are using a braking technique which is no longer considered appropriate, and that others approach braking in a way which has never been part of good driver training.

According to the survey, today’s motorists fall into six types of braking behaviour:

More than 11million motorists use their gears to slow down – using the brakes as little as possible.

This approach is more popular with older drivers as it used to be taught in driving schools; however, as braking systems have improved, it is now considered outmoded.

This is because worn brake pads and discs are much easier and cheaper to replace than engine, clutch and gearbox components.

More than three million drivers leave their foot hovering over the brake pedal and dab the brakes when needed.

One in 12 drivers (2.7million) admit to slowing down by repeatedly hitting the brakes and then easing off.

This style is seen most often among drivers under 24.

Half a million drivers, the majority of whom are aged 25-34, say they brake hard only when they get close to the traffic ahead in case it speeds up.

800,000 motorists prefer to brake hard at first, and then ease off as they get closer to the traffic in front.

Incredibly, fewer than half of road users – 41% (13.8million) – use the technique which gives them maximum control of their car: applying the brakes early and gently at first, then increasing the pressure as they get closer to traffic.

Roger Griggs, Communications Director at Kwik Fit, said: “The research shows that there are a huge variety of braking techniques on our roads and some of them are less than ideal.

“Whether it’s through lack of concentration, bad habits or desperately trying to save time on their journeys, people are trying all sorts of braking tactics.

“Braking too early, too late, too suddenly or even not at all can create real problems on the roads.

“Poor or unusual braking not only makes driving stressful for other motorists but is responsible for a lot of accidents.

“The latest official statistics show that accidents caused by sudden braking account for the death or serious injury of almost one thousand people a year.

“This is all before you think of the damage bad braking can do to a car.

“If they are used too harshly, brake pads can wear out quicker than expected, putting drivers at risk of serious brake failure if they haven’t had them regularly checked.”