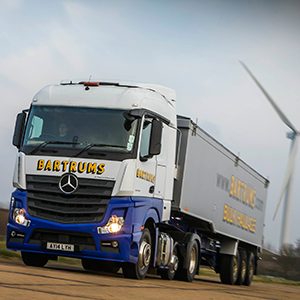 The Eye-based operator’s New Actros 2545 tractors included aerodynamic StreamSpace cabs, and were added to their fleet of 150 trucks.

Most of the 150 vehicles are 6×2 Mercedes-Benz units supplied by Ipswich Dealer Orwell Truck and Van.

Thirteen of Bartrums’ latest trucks are on general haulage duties but seven are specified for bulk tipper work.

All are powered by 449hp straight-six engines and fitted with Predictive Powertrain Control (PPC) systems as well as Daimler FleetBoard telematics.

David Reid, Fleet Engineer at Bartrums, said: “These are our first Euro VI trucks but we know the Mercedes-Benz technology is already well proven in operation.

“Based on our experience of running New Actros units at Euro V we had every confidence that their fuel consumption would be very low, and so it has proved.

“The units on general haulage work are already returning 10mpg, while the tippers are averaging 8.6mpg and two of them are hitting the nines, which in that application is really exceptional.

“There’s every reason to suppose they’ll maintain this performance – we have a 13-plate Euro V Actros, our first truck with PPC, which has returned an average of 10.2mpg from day one.”

It is optionally available on all New Actros models and typically reduces fuel use by 5%.

The FleetBoard telematics system monitors driving style and produces data that can be used to coach drivers to achieve improved economy.

All of Bartrums’ drivers are rewarded with a fuel bonus in their pay packets for hitting or exceeding their mpg targets.

The general haulage tractors are also fitted with cab roof-mounted Freddie air deflectors matched to the 4.5metre height of their curtainsided trailers.

Manufactured by Hatcher Components, these reduce fuel consumption by as much as 6% compared to standard air kits.

“Mercedes-Benz trucks have proved themselves to be reliable, cost-effective performers over many years in our fleet, which is why we continue to invest in them,” added Mr Reid.

“The service from Orwell Truck and Van has always been first class too, and we’ve built up a very good working relationship with the dealer’s Ipswich team.”