Recovery declines in August, but EVs continue to gain traction

August was not a strong month for European new car registrations. Overall, volume fell by 18% year-on-year last month, indicating that the positive trend seen since May – when lockdown began to ease across Europe – has been halted. The 18% drop comes in heavy contrast to the 4% decrease posted by the market when comparing July 2020 and July 2019. In fact, the large decline in August is closer to the 24% decrease witnessed between June 2020 and June 2019. In total, the market registered 881,897 new passenger cars last month, the lowest number recorded for August since 2016. Year-to-date figures show a similarly downbeat picture, with 7,247,341 new cars registered, down by 33% from 2019 and the lowest result over the last decade.

Felipe Munoz, global analyst at JATO Dynamics, commented: “We continue to say that it is still too early to talk about recovery and the results last month indicate that there are still big issues that need to be addressed in the industry. Fortunately, the larger drop seen in August was mostly caused by business/fleet registrations, as private registrations only fell by 4%. This is a good indicator that the situation is not as dire as it might seem.”

1 in 5 new registrations were electrified vehicles

EVs were the industry’s saving grace in August. According to JATO data, consumers across Europe bought 188,700 electrified vehicles, an increase of 121% compared to August 2019. Representing 21.4% of total registrations (a new record for the industry), without these vehicles,  August’s decline in registrations could have been far more damaging.

Munoz continued: “The difficult environment arising from the global pandemic, has led to one positive change – now more than ever, consumers are shifting from petrol or diesel cars to lower emissions vehicles, despite their relative expense.”

Hybrids accounted for 49% of EV total registrations in August, with their volume increasing by 86% thanks to the mild-hybrid technology available in some Ford, Suzuki and Fiat models. Pure electric cars followed this success, with 48,800 units, an increase of 111%. Growth was driven by Renault (+112%), Hyundai (+107%), Volkswagen (+97%) and Kia (+397%), with Tesla only growing by 11%. Plug-in hybrid electric vehicles (PHEV) found 44,700 new customers, with registrations up by 283%. This huge increase amounted from the success of premium brands, accounting for 55% of their volume, and the new Ford Kuga. 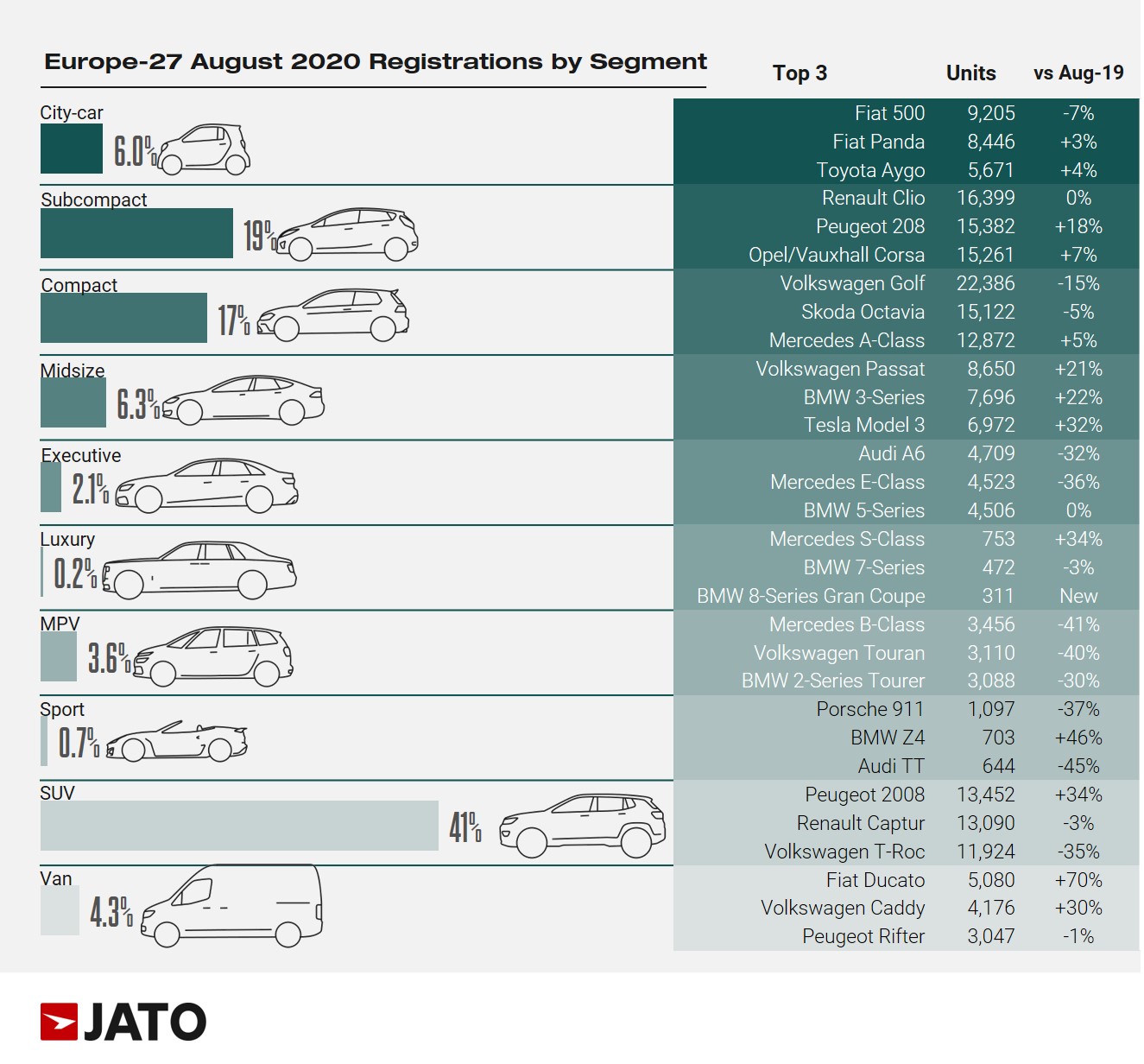 Despite this, SUVs have continued to gain traction, despite their higher price tags. Last month, 4 in 10 new passenger vehicles registered were SUVs – this being 358,100 units, a decrease of just 12%. This decline in sharp contrast to the 20%, 35%, or 44% decrease posted by midsize cars, city-cars and MPVs respectively.

In August, demand for the smallest SUVs totalled 147,000 units, down by 13% from August 2019. The most successful models were the Peugeot 2008, Renault Captur and Volkswagen T-Roc. Similarly, in this segment, the models that gained the most traction were the new Peugeot 2008, Hyundai Kona and Ford Puma. The compact SUVs registered 144,700 units, down by 9% over the same period. The Volkswagen Tiguan led the group but saw a decrease of 19% in registrations, while green rivals like the Toyota C-HR and Kia Niro posted large increases.

While the Volkswagen Golf led the group once again with 22,400 units, big success was seen for France. Both PSA and Renault Groups were able to position 6 of their models in the top 10, leaving just 4 positions for Germany. Munoz added: “We usually see a monopoly of German models in the top 10. The current outbreak is presenting a new opportunity for dominance in the market, demonstrating more consumer appetite for small French vehicles than previously witnessed.”

Outside of the top 10, the Ford Puma secured 16th position with 11,300 units – gaining the highest market share during August. The Kia Niro, boosted by its new electric model, also recorded a huge growth of 107% year-on-year – the 29th best-selling vehicle, with 7,900 units registered. The BMW 1-Series’ volume rose by 96%; Mercedes GLC saw an increase of 64%; Renault Zoe was up by 113% and Volvo XC40 rose by 82%. Skoda registered almost 6,000 units of its small SUV Kamiq, and the Fiat Ducato saw its demand soar, up by 70%, becoming the best-selling van of the month.

Further down the list, Nissan almost doubled the registrations of the Juke; Kia posted 3,700 units with the Xceed; Mazda registered 3,500 units of the CX-30; Audi Q3 Sportback registered 2,518 units; volume increased by 73% for Audi E-Tron; and BMW registered 1,727 units of its Series 2 Gran Coupe.