Alarming news from across the Atlantic as reports of mail trucks catching fire increase. This report from Trucks.com: 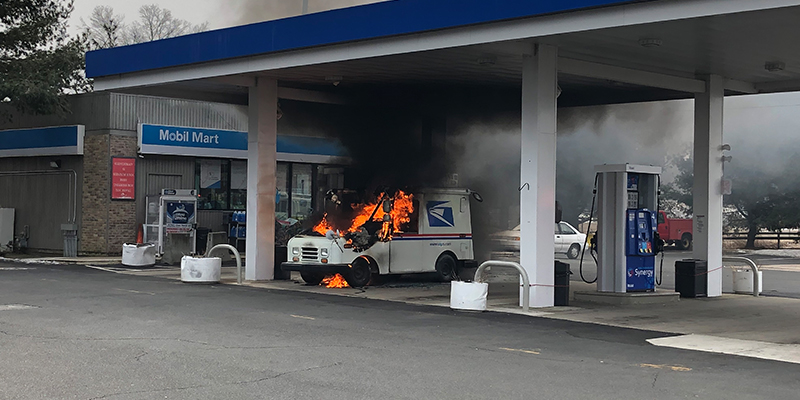 Mail trucks are burning at an alarming rate, and the only people who seem to think it’s a problem are the letter carriers who must drive the aging vehicles.

Twenty-six of the U.S. Postal Service’s aging Grumman LLV delivery trucks have caught fire so far this year, according to a tally by Postal Times. That makes 145 since 2014. If the mail truck were a vehicle model that consumers purchased from a dealer, the National Highway Traffic Safety Administration would have long ago launched an investigation and issued a recall.

But neither the NHTSA nor auto safety groups are addressing this safety issue with the same attention they would if fires were burning up Ford pickup trucks or Toyota sedans. Trucks.com has followed this problem for several years, and we hear the same sad statement from letter carriers: It will take a death or severe injury to force the Postal Service to act.

In a statement to Trucks.com, the agency said, “The safety of our employees is a matter of great importance to the Postal Service.” But it didn’t comment on the fires or provide any specifics on how it is addressing the problem.

“The Postal Service has implemented mandated maintenance schedules and fine-tuned repair and maintenance procedures for the existing Postal Service vehicle fleet, including LLVs, with the goal of making sure vehicles used by postal employees are safe to operate before they are put into use on a daily basis,” the agency said.

Yet the fires continue.

Although it is a frequent target for criticism, the Postal Service does a good job delivering mail and parcels at a decent pace. But the USPS is glacial when it comes to tackling its problems and adopting new technology.

The Grumman LLV proves this point. Manufactured from 1987 through 1994, the trucks should have been replaced a decade ago. The vehicle is a custom body manufactured by Grumman mounted on a Chevrolet truck chassis the automaker stopped making ages ago.

The Postal Service operates about 141,000 right-hand-drive LLVs. They make up about 62 percent of its fleet. The agency plans to replace them with new trucks and has tested multiple prototypes from five teams. But it keeps delaying a decision on what vehicles to purchase. The agency now says that it plans to finally award the contract, worth more than $6 billion next year. The Postal Service also told Trucks.com it might split assembly of 186,000 next-generation daily mail trucks among several of the four company teams competing for the contract.

Let’s compare this to Amazon, which also knows a thing or two about delivering stuff to people’s doorsteps. The e-commerce giant decided earlier this year that it wanted a green delivery fleet. Amazon announced in September that it would purchase 100,000 Rivian electric delivery vans trucks that will start service as early as 2021. The giant retailer plans to have 10,000 of the new electric vehicles on the road as early as 2022. The rest of the trucks will go into service as Rivian delivers them.

Keep in mind that Rivian is a start-up. It will base the vans on the electric pickup truck architecture that it has prototyped and plans to sell as a consumer vehicle. But the giant Amazon order, as well as significant investments in Rivian by the retailer and by Ford Motor Co., pretty much assure the vans will go into production.

If Amazon can get an advanced technology delivery van into service in just a couple of years, the Postal Service should be able to do the same in no more than three or four years. Mail trucks burning up, destroying mail and threatening injury and property damage should be enough incentive.

The Postal Service should also look at what happens when organizations doddle with safety improvements. PG&E, the California electricity provider, is a good example. The utility failed to upgrade its wires and equipment so that it could control sparking during periods of hot, windy and dry weather. One of its transmission lines is suspected of sparking a wildfire that killed 85 people in 2018. The utility filed for bankruptcy after facing at least $30 billion in claims from multiple wildfires.

Imagine what would happen to the Postal Service if one of its aging LLVs caught fire while on a mail route in hilly California under similar weather conditions. Such a fire could burn tens of thousands of acres, destroy homes and other buildings and kill people. The agency couldn’t argue it was just a freak accident. Already nearly 150 of its trucks have burned. The problem is well documented. Just think what a jury might do in the penalty phase of a civil trial.

Jason Levine, who heads the Centre for Auto Safety, told Trucks.com that the Postal Service should act – and quickly.

“This is not a place to be pennywise and pound foolish,” Levine said.

His organization would file a petition seeking an investigation with the NHTSA if the LLV were a passenger car. But so far, it has not done so. The Centre for Auto Safety acts on complaints filed by consumers with the NHTSA. That’s how it gets data to support its arguments. People who drive for fleets, such as letter carriers, rarely file complaints about their vehicles with the government. They figure they don’t own them, so who cares. Or employees fear complaints will endanger their employment.

“It makes it difficult to gather the statistical database case that we would normally use to put together a defect investigation,” Levine said.

But, Levine said, something must be done.

Letter carriers should start filing complaints with the NHTSA every time there is an LLV fire or safety issue. They can do so here. They should also contact the Centre. That will produce the data need to force federal safety officials and the Postal Service to act.

“Waiting for them to be replaced over the next five to 10 years is not a solution,” Levine said.