Police in London have launched a ground-breaking new trial that uses drones to catch speeding drivers.

Officers claim the drones – equipped with night-vision capability – are able to catch dangerous drivers along some of the capital’s busiest routes.

According to Scotland Yard, the Metropolitan Police have been using drone technology in London skies from July – the first initiative of its kind in the UK. 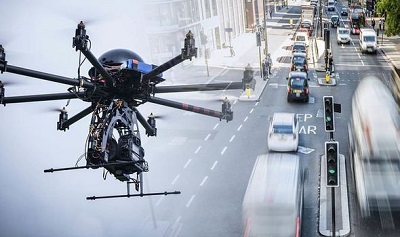 The drone is being used on major routes where speeding offences are more common, such as the A10 near Enfield which has seen eight fatalities in the last two years alone.

Police say the drone, which can work at both higher and lower altitudes, is being used to identify only those travelling at dangerously high speeds. The footage is then be passed to officers on the ground, who will be able to pull over the offending motorists.

If the scheme proves successful, it could be rolled out along more of the capital’s roads, as well as across other regions of the country.

“This is one of many enforcement tactics being used,” he added. “We hope the message of ‘drive lawfully, stay safe and keep a clean licence’ is widely understood.”

He added: “Deterrence is sometimes best achieved through intense enforcement and that’s what this capability enables. The focus will be on dangerous drivers who are racing and those putting their lives and other people at risk.”