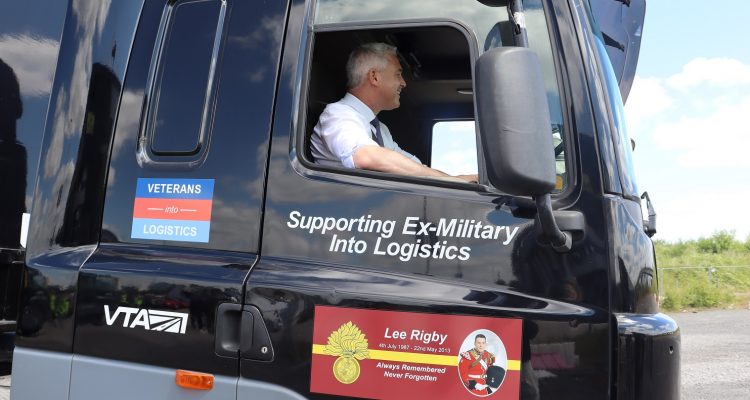 The Government will provide £100,000 in funding to get more veterans in HGV driving roles, Chancellor of the Duchy of Lancaster Steve Barclay has announced today. The new announcement is on top of the £25m of Government funding being distributed through the Armed Forces Covenant Fund Trust to charities to offer support to veterans across the United Kingdom.

The grant has been provided to the charity Veterans into Logistics, which provides bespoke training for former military personnel who wish to pursue careers in HGV driving. The government-funded programme comes after the Ministry of Defence provided 350 HGV training places through the Career Transition Partnership scheme in November.

Chancellor of the Duchy of Lancaster Steve Barclay said: “Veterans gain great skills and experience while in the military and we want to ensure that those skills are fully utilised when they move into civilian work.”

“With £100k in government support, Veterans in Logistics will be able to step up their already successful HGV training.

“This helps both veterans with more career opportunities and continues to grow the recruitment pipeline in the HGV sector.”

The £100,000 of funding from the Officer for Veterans’ Affairs will enable the charity to significantly uplift its annual training throughput, increasing the number of staff and trebling the training available. The charity has already delivered training for more than 300 veterans, supporting them into employment. 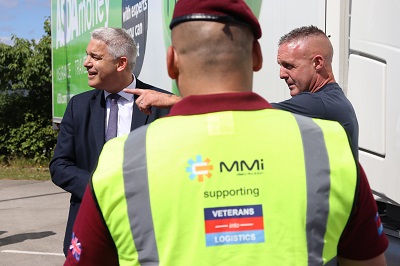 Steve Barclay meets with veteran who now works as ASDA HGV driver and Darren Wright, Director of Veterans into Logistics

Director of Veterans into Logistics Darren Wright said: “Having the support of the Chancellor of the Duchy of Lancaster really does mean a lot to us at Veterans into Logistics and the veteran community. We have managed to change so many lives over the past two years, whilst contributing to the HGV driver shortage by working with some great forward-leaning companies who champion our veterans/service leavers, however, we know we can do so much more with Government support to enhance our mission moving forward.

“Ex-military personnel have a set of skills that the companies we work with look for in employees, they have had morals and standards drilled into them throughout their career and will keep these as a veteran, they are a dedicated, loyal breed of individual. We are grateful for the assistance received so far from the Cabinet Officer, this has enabled us to broaden our team to achieve our mission of supporting even more Veterans into new careers within the Logistics sector. Veterans into Logistics look forward to working in partnership with the government.”

The grant forms part of the OVA’s aim to enable veterans to make the most of their skills and gain employment in civilian life, in particular to facilitate the training and employment of military veterans as HGV drivers given national shortages.

Veterans into Logistics are also developing a programme with Muller Dairies to support veterans who have previously been in prison, to find work in Muller’s distribution warehouses, further helping their rehabilitation. The plans will also allow the veterans to in parallel be trained as HGV drivers.

The government is focusing on supporting veterans into careers that maximise the skills they have gained while serving in the armed forces. This has included rolling out the ‘Great Place to Work for Veterans’ scheme across all central government departments, which was announced this week, and through the fast-track ‘Advance into Justice’ scheme for them to access prison officer roles.

Before travelling to Veterans into Logistics, Mr Barclay visited the Military Veterans Service in Bury, which provides NHS mental health and wellbeing support, known as Op Courage. The minister met with clinicians and nurses who work at the trust.

Steve Eden, who works for ASDA after gaining his C+E qualification said: “I am ex-military having served in the Queens Lancashire Regiment and I would like to take this opportunity to share my story so that other veterans read it and know there is support if you reach out for it.

“For the past few years, I have been suffering from depression which led to me losing my self-esteem resulting in being unemployed for a long period of time. It was when I was at my lowest point that I went to Wigan Armed Forces HQ to speak to a fellow veteran for support, it was during our conversation about how I could get my self-esteem back that I explained I always wanted to be an HGV Class 1 driver like my brother.