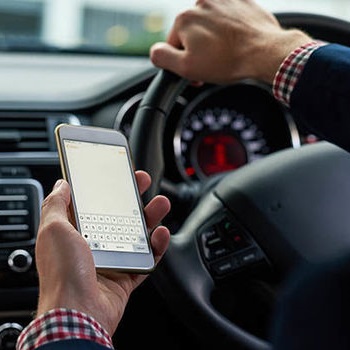 After a fall in the proportion of drivers admitting to using a handheld phone while driving in 2017 following the introduction of tougher penalties, new RAC figures show the problem is actually worsening – and illegal use among some groups has rocketed.

Across all age groups, a quarter (25%) of drivers – the equivalent of 10m people – admit to illegally making or receiving calls while driving, compared to 24% in 2017. Frighteningly though, research for RAC Report on Motoring – the most comprehensive study of drivers’ handheld mobile phone use in the UK – revealed dramatic rises in the proportion of younger working-age drivers admitting to using a phone illegally in 2018.

Drivers in the 25 to 34 and 35 to 44 age groups admit to a range of dangerous activities involving a handheld phone, with nearly half in the younger age group (47%) saying they make or receive calls while driving – up 7% on 2017, and compared to just 25% of drivers in all age groups.

This rises to a huge 57% among drivers who say they do this while stationary but with the engine running. It is a similar picture among those aged 35 to 44, with 39% admitting to making or receiving calls while driving, and 54% saying they do so while stationary.

And, it is not just phone calls that are the problem – more than a third of drivers aged 25 to 34 (36%) send texts, social media posts or emails while driving, compared to just 16% of drivers in all age groups. Twenty-nine per cent of drivers in the 35-44 age group admit to doing this while driving, up a huge 10% on 2017 and back to the same level as in 2016.

Among all drivers there are also significant increases in the percentage who say they use a handheld phone when they are in control of a vehicle, but not moving – such as when they are at traffic lights or sat in congestion. A huge four-in-10 (40%) admit to checking social media messages, texts or emails while stationary – up from 38% last year – while a third (33%) say they send and post such messages, up from 29% in 2017. More than a fifth (22%) meanwhile record videos or take photos while stationary, up from 16% last year.

The findings have prompted the RAC to raise a warning flag about the apparent fading impact of the tougher penalties that were introduced in 2017 to curb illegal and dangerous use of handheld phones by drivers. As of 1 March 2017, drivers face six penalty points and a £200 fine if caught.

A particular problem in the capital?

Looking at use at a regional level, while many parts of the UK recorded a reduction in drivers admitting to using a handheld phone illegally, London stands out as clearly bucking this trend. A majority in the capital (52%) say they make or take calls using a handheld phone while driving, a figure which is up 16% from 2017 and is higher than in 2016 (47%).

Four-in-10 (41%) London drivers admit to using social media or texting while at the wheel, up from 23% last year and 32% the year before with nearly a quarter (24%) saying they do this ‘most’ or ‘all of the time’ while in the car, up from 10% in 2017. An astonishing 59% say they use a phone in this way while stationary but with the engine running.

RAC road safety spokesperson Pete Williams said: “While the introduction of tougher penalties for handheld phone use at the wheel was absolutely the right thing to do, we fear any benefits have run their course with this data showing illegal use is now rocketing among some groups of drivers.

“Following the introduction of stronger penalties in 2017, we saw a promising shift with some drivers changing their behaviour for the better and becoming compliant with the law – indeed recent observational data suggested this was the case. Sadly, that didn’t signal the start of a longer-term trend with drivers now seemingly returning to their old ways and putting themselves and millions of other road users at risk.

“We also know from our research that in many cases motorists know using a handheld phone at the wheel is wrong, and we can see a clear downward trend in people who think it’s safe to do it. But the problem remains, despite the fact the figures around deaths on our roads where someone was found to be using a mobile phone are stark – official figures show there were 32 needless deaths in 2017, with the true figure where a phone played a part in a collision likely to be significantly higher.

“While we believe our data provides valuable evidence to policymakers and road safety professionals about where the issues with compliance with the law perhaps lie, we also need much more data about the extent of the problem which it appears is really no less commonplace now than it was in 2016.

“But the fact remains the change in penalties for illegal phone use while driving has, on its own, not shifted behaviour as much as we would have liked. There is still a huge job to do in communicating to drivers the dangers of continuing to mix driving with illegally using a mobile phone.

“We also know the offence of using a handheld phone is difficult for police officers to enforce, and with police resources as tight as ever the unfortunate reality is likely to be many instances where drivers are getting away with this dangerous act. This is why we believe new forms of detection and enforcement technology could have a valuable role to play here.”

Inspector Frazer Davey for Avon and Somerset Police said: “The results of the survey are concerning. We know that driver distraction is a cause of collisions. As a road policing inspector I see the impact of driver distraction and people are losing their lives as a result of the use of mobile devices by drivers.

“The law is clear on the use of mobile devices in vehicles and police officers across the country will continue to prosecute drivers who choose to drive while distracted on their phones.

“The best advice I can give is to turn your mobile device off or into a flight safe mode when you get into your vehicle. If you need to use your device for satnav while you drive, then activate the voice controls and drive safe mode so messages and alerts don’t take your attention away from the road. Even a momentary glance at your device could make the difference between yours or someone else’s ability to return home to loved ones.

“It’s simply not worth the risk.”

National Police Chiefs’ Council lead for Roads Policing, Chief Constable Anthony Bangham said: “We remain committed to reducing the harm caused by distracted driving. Through the NPCC strategy, ‘Policing our Roads Together’ we co-ordinate two national campaigns each year to remind drivers of both the penalties for and the consequences of using their mobile phone illegally. However, we take robust action to prosecute offenders at all times and will continue to do so.

“Mobile phones have many more distracting features today compared to when the legislation was first introduced, but our message remains simple, a moment’s distraction can change innocent lives forever, don’t take the risk.”

Tackling the issue: what can drivers do?

Be Phone Smart, the campaign which challenges people to rethink their attitude to using a mobile phone when they are driving, suggests they think about the following: Elddis Transport is rolling out new mobile working technology as part of a programme to fully digitise the workshop. Part of a fleet maintenance system from Freeway