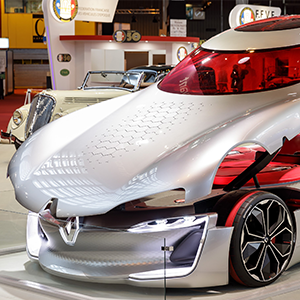 Retromobile is indisputably the number one gathering of the year for classic car aficionados. With a long and illustrious history in the industry, Renault will present vehicles whose elegance – ever a hallmark of the brand – is unmistakably French. From pre-war models to modern-day concept cars, ‘French design’ will very much be in evidence at the Porte de Versailles.

Groupe Renault designers will be in attendance on the stand and will produce sketches of the vehicles on display on the Wednesday (8 February), Saturday (11 February) and Sunday (13 February).

The latest jewel in the collection

Renault Classic has chosen Retromobile for the first public appearance of its latest acquisition. A shooting star bearing chipped paintwork and weathered by time, this model is none other than an exceedingly rare Viva Grand Sport coupé from 1939.

A true gem, it is completely original, having never undergone any restoration. In perfect working order, despite not having moved for almost half a century, this car has covered less than 14,000 miles.

As the very last edition of the Viva Grand Sport, this luxury model boasted a dynamic look and packed a serious punch – justifiably earning it the adulation of the media at the time of its launch.