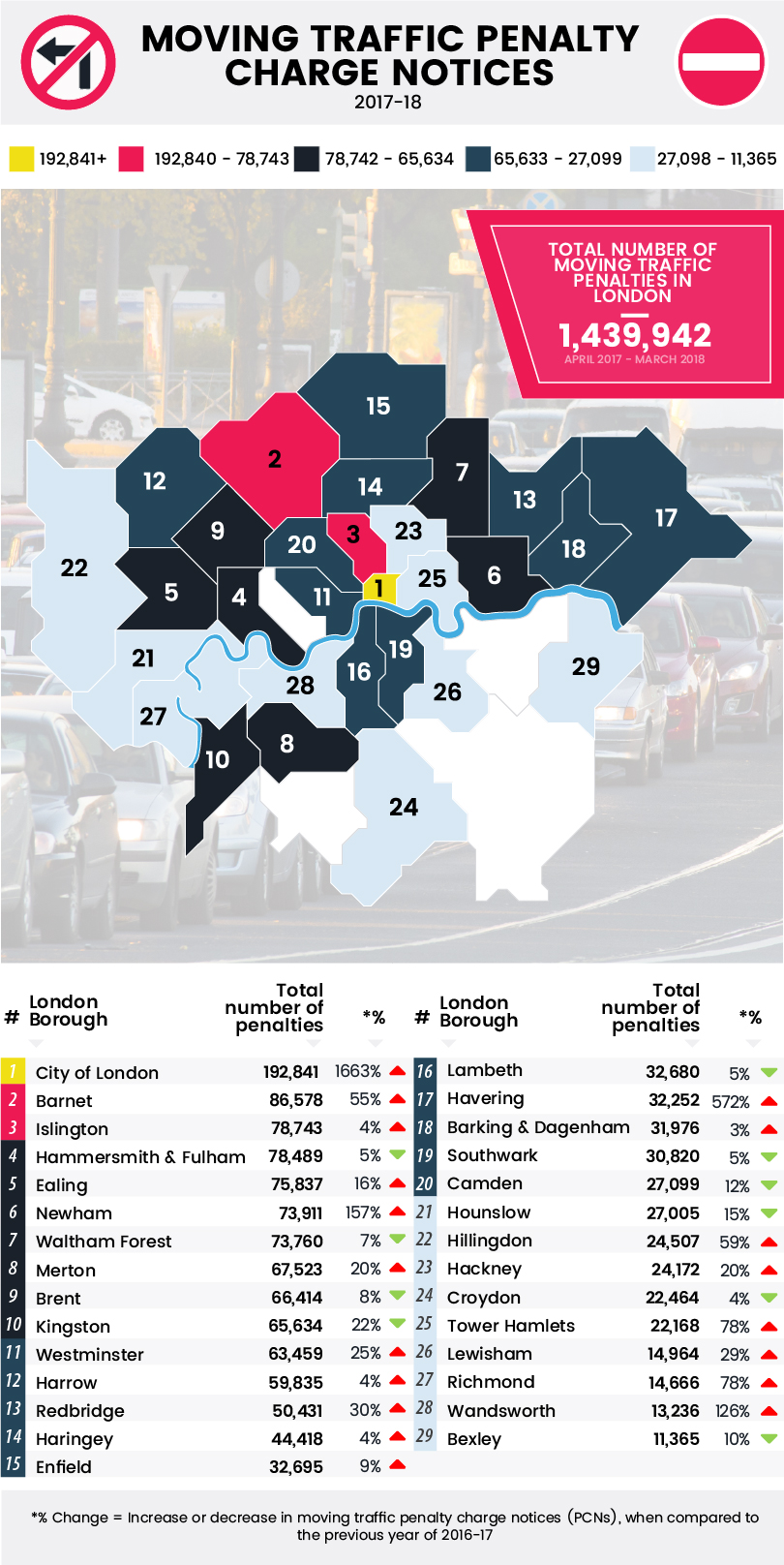 There are a range of ‘moving traffic’ contraventions, which include: using a route restricted to certain type of vehicles (e.g. bus lanes), performing a prohibited left or right turn, failing to comply with a no entry sign, stopping in yellow boxes at junctions and many more. If a driver commits any one of these violations and their normal or private registration plate is captured by a CCTV camera or CCTV vehicle, they will then likely be subject to a payable fine.

The aim of these fines is to not only make irresponsible drivers accountable for their actions but also improve road safety and reduce congestion levels.

Utilising the latest data derived from London councils, private number plates company Click4reg.co.uk sought to find out the number of penalty charge notices (PCNs) that had been issued by London councils to road users for moving traffic infringements between April 2017 – March 2018.

In addition to this, highlight if moving traffic PCNs had increased or decreased for each of the 29 considered London boroughs in comparison to the previous year (April 2016 – March 2017).

Click4Reg discovered that City of London council issued the highest number of moving traffic PCNs in London, at an astounding 192,841 – the equivalent of 528 penalties each day. Compared to April 2016 – March 2017 (10,939 penalties), it represents a significant increase of 1663%.

Coming in third place is Islington, with 78,743 PCNs given by the council to those drivers found guilty of breaking moving traffic laws in the North London borough during 2017-18 – comparable to 216 incidences a day.

Upon further analysis, Click4Reg can also reveal that the South West London borough of Kingston had the biggest percentage fall in year-on-year on moving traffic PCNs, at 22%. Figures for 2017-18, show there were 65,634 penalties compared to 84,072 (2016-17) the preceding year.

Elie Fakhoury, the Managing Director of Click4Reg.co.uk commented: “Drivers who commit moving traffic violations can pose a real threat to the well-being of other road users. Consequently, its important offenders face the appropriate consequences to deter them from taking unnecessary chances and performing risky manoeuvres which break the law. For many, the punishment they face usually comes in the form of a penalty charge notice. By the sheer amount of penalty charge notices issued, this research certainly shows that the prevalence of moving traffic infringements in London is certainly higher than anyone would expect. Given the capitals busy roads, individuals should consistently seek to re-familiarise themselves with the rules, markings and signs in the highway code. In turn, this will not only minimise the number of moving traffic contraventions but more importantly, increase the level of awareness and care taken by drivers whilst on the road”.