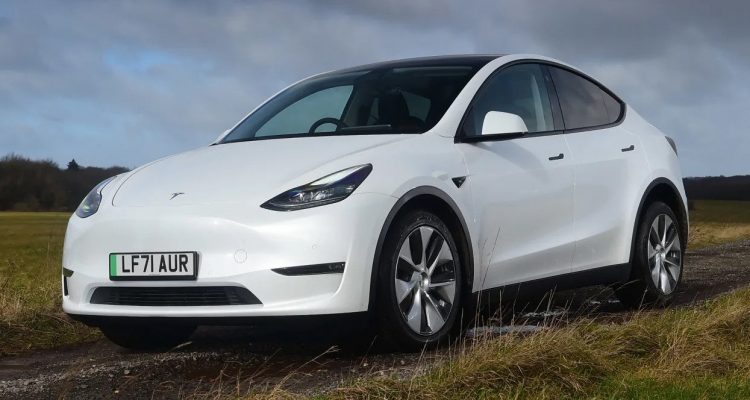 Tesla’s Model Y is the safest car to be launched onto the UK’s roads in 2022, according to What Car? Safety Award judges. The crossover SUV is the first model from the all-electric carmaker’s stable to win the coveted accolade, with the result being confirmed at the annual What Car? Awards in London tonight (20th January 2023).

The Model Y emerged victorious from a 10-car shortlist, with all vehicles selected based primarily on their Euro NCAP test scores, in addition to other safety criteria such as technology innovation, mass-market appeal and Assisted Driving technology performance.

Thatcham Research, the What Car? Safety Award main supporter and co-judge[i], is a major contributor to the Euro NCAP programme, both from a testing and protocol-development perspective.

Tesla’s fully-electric family car achieved the highest overall score of any car tested under Euro NCAP’s latest – and most exacting – protocols. Additionally, the Model Y’s near-perfect 98% Safety Assist score, which relates to the performance of its collision-avoidance systems, is the highest ever recorded by the European safety rating agency.

“The Tesla Model Y is an impressively high performer. Its Safety Assist score is the best we’ve ever recorded, and its Adult Occupant Protection score of 97% is the best in 2022,” Thatcham Research’s chief research strategy officer, Matthew Avery, said. 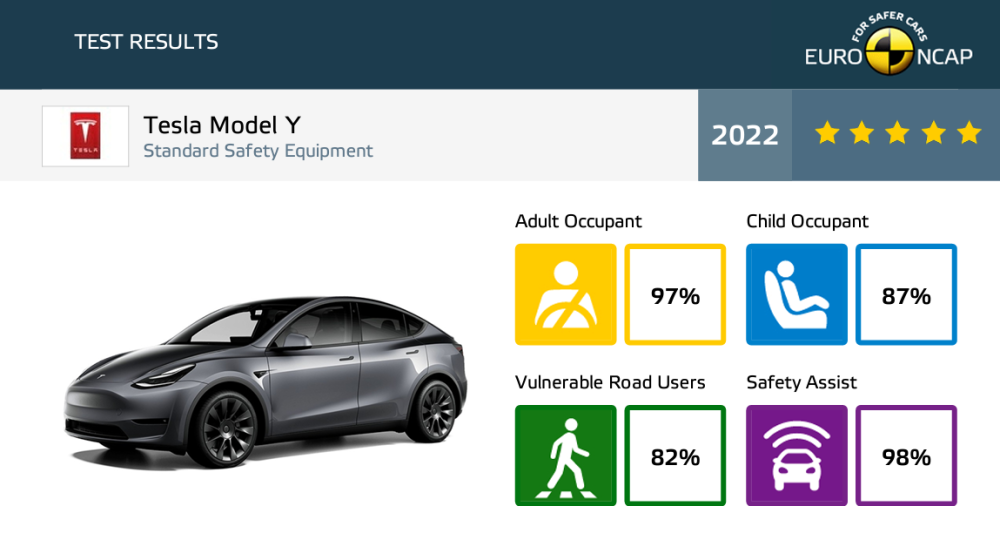 “Tesla has made some bold claims about being super safe in the past, and they’re really delivering on that promise. In terms of the passive and active safety[ii]performance of the Tesla Model Y, there’s no safer place to put your family. Credit to Tesla for that.”

The Model Y scored full points in Euro NCAP testing for its lane support system, as did its Collision Avoidance Driver Monitoring system which uses camera-based direct monitoring to detect a distracted driver and automatically changes the sensitivity of the Forward Collision Warning System to be more reactive.

“Driver Monitoring has a pivotal role to play in improving road safety. In fact, we believe it to be one of the most beneficial tech advances in recent times,” Avery added.

“It is not a ‘spy in the car’ and doesn’t record or log driver activity.

“Its impact as a ‘guardian angel’ technology in the short-term is profound, preventing fatigue from killing people, while ensuring motorists remain engaged and undistracted by handheld devices.

“It’s encouraging to see DMS fitted to the majority of this year’s top safety performers.”

The car’s camera-only Vision system also drew praise from judges for its performance when preventing collisions with other cars and pedestrians during Euro NCAP track tests. In tests of the system’s response to cyclists, the Model Y scored maximum points.

The car’s over-the-air-update capability also impressed, giving drivers peace of mind that the Model Y parked on their driveway will benefit from constantly improved vehicle features and performance.

Avery added: “The Model Y is a very impressive car. As judges, we’re disappointed we couldn’t take the car’s Assisted Driving Grading into account as Tesla’s system hasn’t been made available for testing. But the Model Y’s incredible performance in crash protection and avoidance meant it was fundamentally unbeatable. This is a fact underlined by the car also taking Euro NCAP’s ‘Best in Class[iii]’ honour for the small off-roader category.”

What Car? consumer editor, Claire Evans, said: “Think of the Model Y as a pumped-up version of the Model 3 saloon, making it great for families who need more interior space. Even better, Tesla doesn’t charge much of a premium over the Model 3 for this model’s added practicality.

“With a real-world range of 250-300 miles, the Model Y goes further between charges than rivals, and owners can replenish the batteries using the fast, well-maintained Tesla Supercharger network.”

“Tesla have committed themselves to a very high level of safety performance in crash prevention and protection, we hope to see them continue to aspire to that goal in the future.”

Runners-up push Tesla to the wire

Continuing the dominance of fully-electric cars during the most recent judging cycle for the Safety Award, the Chinese-made Smart #1 and Mercedes-Benz EQE were also rewarded for their strong showing.

Finishing as first runner-up is the impressive Smart #1. This keenly-priced SUV is the first production car to emerge from a partnership between Smart-owner Mercedes and Chinese carmaker Geely. 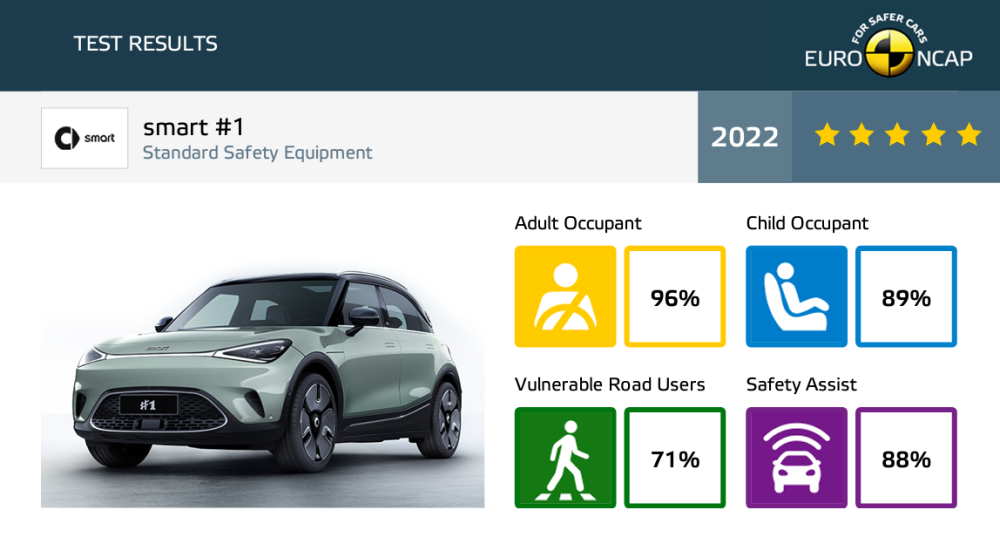 Aimed at younger drivers and with a price tag of around £35,000, judges felt the Smart #1 has the potential to bring high-end safety features to the mass market.

“It is designed for the younger buyer and we know from our research that young motorists don’t prioritise safety in the same way as older drivers with families. But Smart hasn’t compromised because of that.

“For instance, the #1 scored an incredible 96% for its Adult Occupancy performance. This is particularly impressive for a compact car with a smaller crumple zone to absorb energy during a collision,” Avery said.

Like all the cars shortlisted for the Safety Award, the Smart #1 features centre airbags, a relatively new technology helping to prevent life-threatening interaction between vehicle occupants during a side impact collision.

It also has an advanced eCall system that alerts emergency services in the event of a crash, and ‘post-impact braking’ technology that automatically applies the car’s brakes to prevent secondary collisions.

Mercedes-Benz has a strong reputation for safety innovation, and the EQE – the most expensive car in the top-three – marks a continuation of that trend by earning its position as second runner-up. 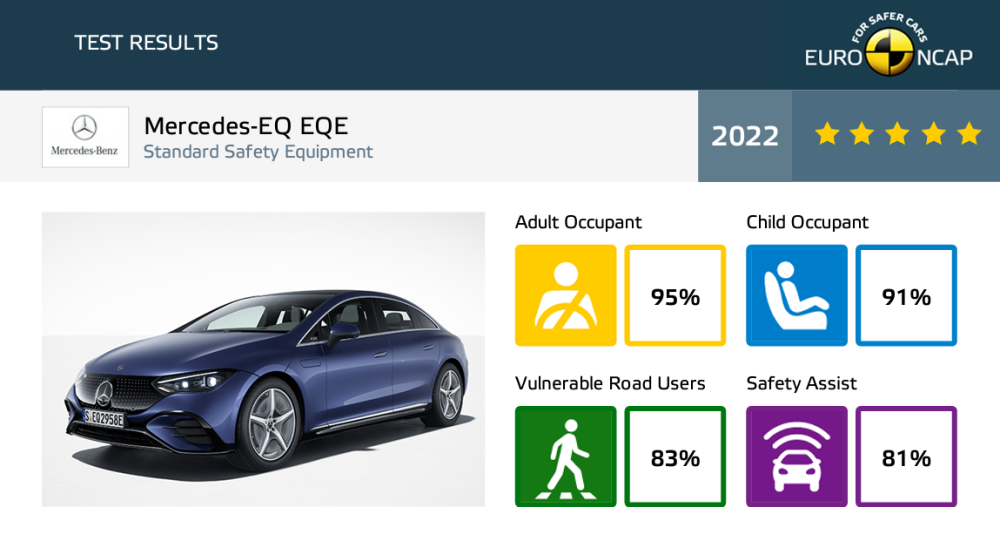 “The brand was the first to introduce Anti-Lock Braking Systems and Electronic Stability Control. With the EQE, Mercedes is now the first to develop an Automated Emergency Lane Control system, which it calls ‘Active Emergency Stop Assist’,” Avery pointed out.

In the event a driver becomes unresponsive on the motorway – in Assisted Driving mode – Active Emergency Stop Assist intervenes to move the car to the adjacent inside lane where appropriate, before performing a controlled stop.

Current legislation allows for only limited use of such systems on UK roads but experts agree this technology will be central to the safe and successful adoption of Automated Driving tech in the future.

“The EQE has all the safety features you would expect of a high-end model from a carmaker with a reputation for great safety. It continues to push the boundaries of innovation – albeit on a car with a price tag where you’d expect the very highest levels of safety,” Avery concluded.

The results of the latest What Car? Safety Award cap a stunning safety year for new cars launched in Europe during 2022. Of the 67 vehicles tested by Euro NCAP last year, all of them achieved four- or five-star ratings for the first time in the programme’s history – with a record-breaking 80% achieving the highest five-star rating.

[ii] Passive safety focuses on impact protection and the performance of seatbelts and airbags, while Active safety focuses on crash-avoidance technologies such as Autonomous Emergency Braking (AEB), Lane Support Systems (LSS) and Blind Spot Information System (BLIS), amongst others