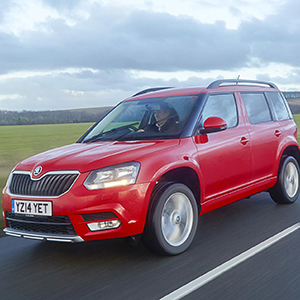 The ŠKODA Yeti has added to its impressive collection of award silverware after being crowned Used Car of the Year in the 2015 Auto Express Used Car of the Year Awards. Judges also named the Yeti as Best Crossover and selected the Citigo as its winner of the City Car category in what was another successful year for the brand.

“There’s nothing mythical about the appeal of ŠKODA’s practical crossover,” explained Auto Express Editor-in-Chief, Steve Fowler. “The Yeti has more than proven itself as a new car, and today it’s more desirable than ever as a second-hand buy, which is why it’s our 2015 Used Car of the Year.”

The Citigo also beat off tough competition to take the City Car title. Having already scooped four consecutive New Car Awards in the same category (along with the overall Car of the Year title in 2011) the Citigo is now Auto Express’ favourite used city car. The judging panel highlighted the Citigo’s exceptionally low running costs, quality and spacious cabin.

The Yeti and Citigo are available across the ŠKODA retail used network. As part of the brand’s current offers, customers choosing to finance their cars through ŠKODA Financial Services Solutions Personal Contract Plan (8.3 per cent APR representative) qualify for low price service plans starting from £99.

Further details of the 2015 Auto Express Used Car Awards can be found at: http://www.autoexpress.co.uk/best-cars/84549/best-used-cars-buy-2014