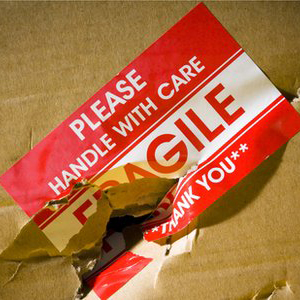 A quarter of UK drivers are arriving at customers houses with faulty or broken goods at least once a month, with the blame falling to a bumpy journey caused by cracks and potholes found on UK roads.

Out of the 306 delivery drivers polled by Versapak, a secure packaging expert, regarding how often goods carried in their vehicles became damaged or harmed during transportation, the majority of delivery drivers (54%) admitted this happened at least once a month. A further 21% revealed that, due to the fragile nature of cargo they transport, damage to goods occur as often as once a day or more.

To find out what was causing this damage, the drivers who had sustained damaged loads were asked to identify all the causes behind the problems they had experienced. 64% confessed that the cracks and potholes of British roads were to blame for the accidental damages, followed by inappropriate packaging of products (51%) and clumsy loading of the vehicle (24%).

Electronic goods were revealed as the most likely products to become damaged during transportation, including laptop computers, mobile phones and tablet devices.

Commenting on the findings, Leon Edwards, Group Managing Director of Versapak, said: “When taking into account the shocking state of some UK roads and motorways, as well as the amount of pot-holes scattered around, the results of the study do not necessarily surprise me!”

FleetPoint have recently installed a Pothole Reporting tool which allows you to report potholes and any other road faults direct to the Street Repairs team.