‘Stealth’ cameras may have to be repainted and signposted 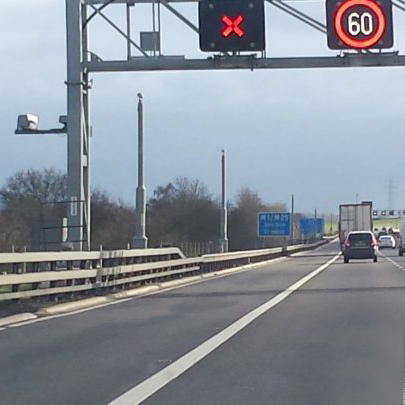 One stealth camera seen on the M25

John Hayes, the roads minister, has ordered the Highways Agency to review both the colour and signposting of the camers, which are grey rather than the highly visible yellow cameras seen around roadworks.

As previously reported on FleetPoint, the cameras have already been deployed along stretches of ‘smart motorways’ to enforce variable speed limits when the hard shoulder is used as an additional lane at peak times.

The camera is able to cover all lanes of the motorway and can take rapid pictures of the offending vehicle unlike the current set-up which includes two cameras to catch a speeding car entering and leaving the zone and is unable to cover more than one lane.

More than 600 motorists have been caught speeding since the cameras were deployed on the M25 in Kent in October.

In an article that appeared in today’s edition of The Telegraph, Mr Hayes said: “I have been concerned about ‘stealth cameras’ and have ordered a review as a matter of priority to look at exactly where they are, what they are being used for and how they are signed. That includes the colour of them.

“It seems to me that it is important that they are identifiable. At the moment as you know people assume that speed cameras are painted yellow. I think it’s really important that people know where speed caqmeras are. The suggesttion that stealth is involved is not reasonable.”

Also in the article, Ed King, President of the AA, stated: “Motorways are our safest roads, are we going over the top when really we should be concentrating on where the majority of accidents happen which is actually on rural roads and lower speed roads.”

Do you see the stealth camera as a help or a hindrance? Let us know in the comments below.