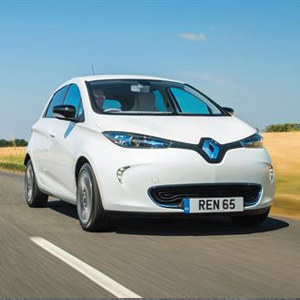 The all-electric Renault ZOE has been recognised by What Car? judges for the second time this year having now picked up the title of ‘Best Used Green Car’ at the What Car? Used Car Awards 2018.

This new accolade comes after the ZOE was named ‘Best Electric Car’ at the What Car? New Car Awards 2017 in January.

The Renault ZOE was recognised by What Car?’s used car gurus for its hassle-free, user-friendly motoring as well as its practicality and spacious cabin. Since launch in the UK in 2013, Renault has almost doubled the ZOE’s range from 130 miles (NEDC) to 250 miles (NEDC) thanks to technological advancements such as an increased battery capacity and an uprated motor.

Commenting on the decision to award the 100 per cent electric ZOE, Alex Robbins, Used Cars Editor, What Car?, said: “Electric cars are gaining in popularity, and the Renault ZOE is one of those we have to thank. What’s so impressive about the ZOE is just how hassle-free it is to drive. Conventional, easy-to-understand controls make it so user-friendly that it’s a doddle for anyone used to driving a normal, combustion-engined automatic to get to grips with. But it’s also practical and spacious inside, and thanks to its zippy electric drivetrain, it’s quick and easy to drive around town. Best of all, as a used buy, it’s now looking like terrific value. It truly is an electric car for the masses.”

Vincent Tourette, Managing Director, Renault UK, said of the result: “For the fully electric ZOE to be recognised by What Car? judges is truly fantastic. In January, What Car? confirmed that the 2017 model year ZOE was the Best New Electric Car, whilst now it has also been named as the Best Used Green Car. This means that no matter what their budget, owners can be a part of the electric motoring revolution, safe in the knowledge that the ZOE comes well recommended. We’re delighted that What Car? has recognised the ZOE’s talents for both new and used car buyers.”

The Renault ZOE is an all-electric, five-door supermini available in a choice of three trim levels and with two battery options. Despite its affordability, the entry level Expression Nav comes with a high level of standard specification including items such as climate control and the 7-inch touch screen R-Link 2 infotainment system with sat nav. In Dynamique Nav, the features include hands free keycard, automatic lights and wipers and rear parking sensors. The new top-of-the-range Signature Nav trim provides buyers with features including supple leather upholstery, a seven speaker BOSE® audio system, heated front seats and a rear parking camera.

With the new R90 motor and Z.E.40 battery, ZOE’s range is 250 miles (NEDC) – Renault estimates that in real-world driving conditions that this equates to around 186 miles in summer and 124 miles in cold winter conditions. ZOE can charge from zero to 80 per cent full in as little as 60 minutes thanks to its patented Chameleon Charger™ that allows it to make the most of the widest range of power supplies and also keep charging times to a minimum. Renault’s Range OptimiZer technology ensures ZOE is highly efficient with its heat pump, a bi-modal braking system and Michelin ENERGY E-V tyres.

ZOE is available to purchase in two ways. Firstly, under a battery hire scheme, where ZOE pricing starts at £14,245 (OTR) after the Government Plug-in Car Grant with battery leasing from £49 per month. New for 2017 is the ‘Unlimited’ option with no mileage cap, priced at £110 per month. It is easy to purchase a used ZOE with a battery lease – the new owner simply chooses which leasing option suits their needs the best and starts monthly payments based on their lease plan. You can also buy the ZOE outright. ZOE i ‘full purchase’ models start from £18,995 (OTR) after the Government Plug-in Car Grant, giving the buyer full ownership of the car and battery and no monthly battery lease payment.

ZOE is the best-selling electric vehicle in Europe and more than 4,500 ZOE have been sold since launching in the UK in 2013. ZOE is one of three models in Renault’s diverse electric vehicle range which also includes the Twizy quadricycle, the Kangoo Van Z.E. and the forthcoming Master Z.E. large panel van.