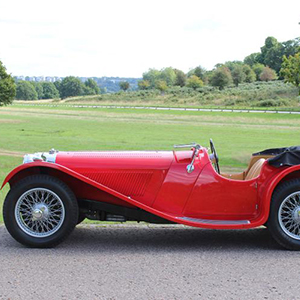 International auctioneers Coys are set to auction over 65 classic and sports cars at their regular autumn auction, The Spirit of Motoring, held at the Ascot Racecourse in Berkshire this Saturday 10th October.

The 1991 Rover Mini on offer presents a rare opportunity to own a car with a unique and outstanding pedigree, having being owned by one of the original 1960’s style icons and film actress, Britt Ekland. Ekland owned the Mini for 5 years and helped to make the Mini the incredible and appreciating classic car that it is today. She only sold it when she auctioned off everything she owned after her divorce from Slim Jim Phantom, the drummer from the Stray Cats in 1996. This Rover Mini still has the original V5 and service record book.

The wonderful 1937 Jaguar SS 100 2 ½ litres is in excellent restored condition and would be suitable to grace the most precious Jaguar collections in the world or any concours event it might be entered into. In its current ownership the car has been regularly displayed at concours events throughout the UK, where it has performed very well, receiving trophies at most events it attended.

Clay Regazzoni’s 1966 Tecno works car is one of the most beautiful Formula 3 cars Coys has offered. It is offered with a wonderful history file containing a vast amount of period racing images and with the correct FEV fire system and safety belts in date, making it a very cheap entry into the historic racing scene.

The 1965 Lotus Type 26 Elan S2 is also a very interesting and a cost-effective entry for some of the best events in the classic car world. It was the winning car in one of the races of the 1966 Bahamas Speed Week. In August 2013, it was granted a FIA Appendix “K” Historic Technical Passport (HTP). Importantly, the car retains its original chassis, engine, body and gearbox and even comes complete with two sets of the original JAP Magnesium wheels from 1966, plus the original grey hood.

Chris Routledge, Managing Partner of Coys, said: “Ascot promises to be a great auction with over 65 high quality and interesting classic and sports cars. Held in the grounds of the Ascot Racecourse, a true British sporting establishment, we have lined up an exemplary selection of racing cars as well as a range of Ferraris, Jaguars and Mercedes-Benz, amongst other important collectors’ cars.”